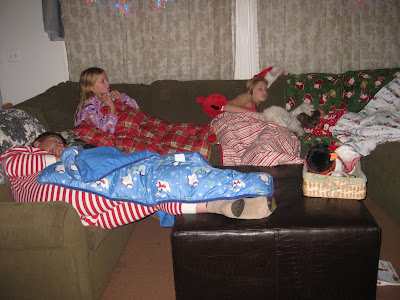 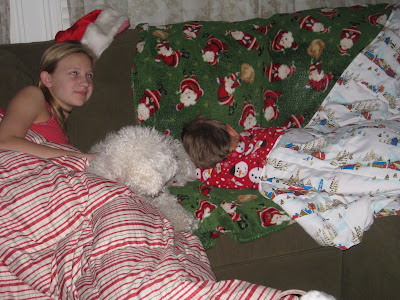 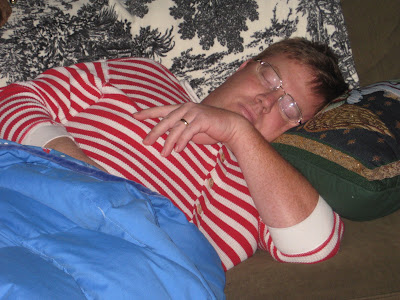 So after (what the kids would deem) the fun stuff, it's time for a tradition that is primarily near and dear to my heart - watching a classic holiday movie. The kids actually complain less than you might think LOL. We all camp out on the sofa and floor and watch, depending on the year, White Christmas or Holiday Inn. This year was a White Christmas year (to Hero's mild disappointment, since she loves Holiday Inn). Besides the sweetness of the movies, it's a good way to settle the kids down in preparation for their Christmas Eve campout in our bedroom. The girls make it through the film, but inevitably the boys crash, including the grown up one. At least for the little boys the movie is followed by bedtime. For the big one, it's time to hit some caffeine and get to work, if you know what I mean ;-P (no, we are not one of those families that has absolutely everything ready to go a month before Christmas). James is going to groan when he sees the pictures of him in his Christmas union suit, but he's a good sport and wears it every year for the kids (and me, because I think it is hilarious).

Loe the fact James will wear the jammies. I would never get Dad to do that, yet get a pic of it!