The Highs and Lows

Sometimes, when we are having one of those "good parenting" days, we ask the kids around the dinner table about their day's highs and lows.  I think we first heard of that in some silly movie before we even had kids, but it must have stuck over all these years.

Missionary life for sure often seems like a life of mountain top highs and darkest ocean depth lows.  The highs seem fairly obvious: cross-cultural experiences that broaden your perspective and your wisdom (hopefully!), witnessing the dramatic triumph of light over dark, reliving the childlike joy of a new believer, and so on.  The lows, though, are perhaps less obvious, but they are real.  They include having to live out in a very real way that family cannot come before ministry, that the saying that "home is where the heart is" is trite and untrue (my heart, I can see, over the years will be splintered apart into tens of pieces as my family grows and spreads), and sending out seventy-five emails a week to pastors and churches and being told over and over again that they are not interested in hearing about the Lord's work going on in Togo (an odd choice of phrase from a pastor, if ever I've heard one).

None of those lows are probably surprising to the person who's been on the field or who closely follows missionaries.  But we seem to have a newer (or at least more widespread and popular) low: being a public enemy.  In the wake of the death of John Allen Chau, the young American missionary who attempted to make contact with a remote and hostile people group, it has become clear that more Americans view missionaries as dangerous fools.  My first reaction to the criticism (even coming from fellow Christians) was one of bewildered hurt.  Gone are the relatively recent days when missionaries were recognized, even by ostensibly secular sources, as a force for good in the world.  But I've found that once I moved beyond my feelings of personal ego, that this opposition reinvigorates me for the task at hand.  If my work disturbs and bothers the world, it means that it matters! May the weak-willed, people-pleasing, half-hearted milquetoast Christian who seeks to live biblically without offending a modern secular culture be gone forever. Instead I pray to be a warrior fit for service to Christ.

Through You we will push back our adversaries; Through Your name will we
trample down those who rise up against us.  Psalm 44:5

So, paradoxically, that which, at first glance, seems a low, turns out to be a high - a renewal of spirit and courage and a recommittment of mission.  Praise God for the work of His faithful, his human army, that through the ages, from the earliest martyrs down through the present age, encourages us by their righteous example to drop to our knees in prayer and then stand up again outfitted for battle.

Posted by The Merry Band of Fife at 9:53 AM 0 comments

The difference between darkness and light is hard to describe without alluding to, well, dark and light, day and night.  Perhaps because God has never made a more viscerally relatable theological concept.  Being in a town in a underdeveloped part of Africa has illuminated this to me in a way that I might have never understand in my American life.  You see, the dark of my suburban America, well, it just wasn't that dark.  There were street lights every couple of yards.  Entertainment options abounded after the sun went down. This was not a natural light, but it was a light nonetheless.  The implications of that artificial light and it's false sense of security is a whole other blog post to itself, and one that I won't explore here.  Right now, I'm in a place where, when it's dark, it's DARK.  A world which I'm coming to know and find unique beauty in during the day is a world that, quite honestly, scares me in the dark.  In the dark, you see, the bugs come out.  In the dark, you must carry a flashlight everywhere to watch for snakes.  In the dark, even though I know there is a wall around my house and there are no lions anymore in Togo, there is still a fear of what lurks in the utter blackness that engulfs you no more than a few feet past your eyes.  In the dark, we've had our home broken into, twice, including once while we were asleep, oblivious to the danger.  This stark contrast between my perception of my existence in the light of day versus the dark of night (and some insomnia, thank you, aging mind and body) has driven me into the scripture.  It's led me to be reminded that I was once a child of the darkness, trapped in the fear and uncertainty and danger.  Mortal danger, nay, IMMORTAL danger.

And it's also shown me my greatest and only hope, that I have been saved out of the reach of that darkness.  That I've been brought into the light, into the glorious brightness and transparency of never-ending day - through the death and resurrection of Jesus Christ, the only Son of God.

But you are a chosen race, a royal priesthood, a holy nation, a people for his own possession, that you may proclaim the excellencies of him who called you out of darkness into into his marvelous light.  1 Peter 2:9

And, praise be to God, this is not just for me.  It is for all who are called, for all who are chosen by the Father to be seekers of the Light.  Because the Truth is the same, even in what appears to us to be blackest, deepest night.  The War has been won.  Darkness has been defeated; it is in its death throes.  We must then labor faithfully at the task God has appointed us to, eagerly anticipating the glorious dawning of the perpetual Day that awaits us.

Then the angel showed me the river of the water of life, bright as crystal, flowing from the throne of God and of the Lamb through the middle of the street of the city; also, on either side of the river, the tree of life with its twelve kinds of fruit, yielding its fruit each month.  The leaves of the tree were for the healing of the nations.  No longer will there be anything accursed, but the throne of God and of the Lamb will be in it, and his servants will worship him.  They will see his face, and his name will be on their foreheads.  And night will be no more.  They will need no light of lamp or sun, for the Lord God will be their light, and they will reign forever and ever.  Revelation 22:1-5

Posted by The Merry Band of Fife at 8:23 AM 0 comments

I've been behaving like a spoiled brat lately.  I've been pouting about being hot and sweaty but most of all, about not being able to observe all of my multitudinous holiday traditions.  I've spent more than a little time poring over photos from Christmas's past on my phone and watching others holiday prep on social media.  It's been making me cranky and irritable for the last few days.  I prayed.  I asked others to pray for me, to take away this unholy desire for security and comfort that gripped my heart.  Thank the Lord I serve a God who answers prayer.  And His answer came in the form of a prayer request for someone else, someone who doesn't even know me.  A woman at the hospital just lost her seventh of eight children.  After losing her husband earlier in the year.  Her only surviving child is handicapped.  Her grief is beyond measure.  How can I dare to preach the goodness and grace of the God of the Bible to such as these?  People who have experienced searing, brutal loss that puts missing Christmas trees and delayed moments with family (family that are still very much alive!) into its proper perspective.  Missions work is HARD work.  It will often leaved you drained and overwhelmed.  But one of its blessings is the stories you hear and the way that God weaves those stories into my own life to change me just as much as the people we are evangelizing. 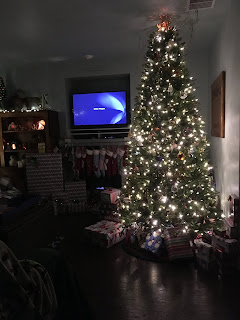 Posted by The Merry Band of Fife at 7:49 AM 0 comments