Is Africa's moment over? As missionaries raising support to return to the field full-time, we have the privilege of contacting American churches by the dozens every week.  We've become accustomed to all sorts of pastoral Christian lingo about why they are not interested in hearing about the ministry in Togo (and, lest we sound cavalier, we empathize with how difficult and sometimes disheartening it must be to feel a constant tension between a mission-minded heart and a budget that just doesn't seem to want to stretch one penny further).

Perhaps the most perplexing response we've received with some regularity, though, is that most African countries (Togo included) are fully evangelized and that their church only desires to hear from and partner with missions to new fields of unreached people groups.  While it's easy to understand the honorable intentions behind such a statement, the mission-minded American Christian church is perhaps short-sighted in such thinking.

In April, the Pew Research Center released a report showing that, by 2060, six of the top ten countries with the largest Christian populations will be on the African continent.  This is probably not surprising news to most who are even marginally engaged with national and international trends.  The rise of secularism in the historically Christian West seems to permeate the news daily.  The increasing representation of African and even Asian Christianity likewise occasional makes news, including earlier this year, when their allegiance to historic Christian orthodoxy blunted the advance of theological liberalism in the mainline protestant United Methodist Church conference. 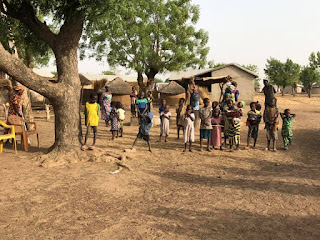 This news serves as both an encouragement and a warning.  Our African brothers and sisters in Christ are poised to become, numerically speaking, a bulwark against insidious, creeping religious relativism.  Now, more than perhaps ever, the work being done by national leaders in conjunction with international missionaries is of first importance, as African Christians ready to take on an increasingly influential seat at the global Christian table.  Despite impressive numerical growth, though, African Christianity, including right here in Togo, is still spiritually immature and needs careful mentoring, discipleship, and theological training.

Christianity on the African continent is easily tossed about by the winds of syncretism.  Syncretism is especially a problem in a drop-and-dash model of missionary engagement, where the emphasis is on conversion numbers amongst unreached people groups, rather than the slower, more relational and less glamorous work of creating, maintaining, and replicating systems of discipleship and advanced pastoral training.  The other major threat to African Christianity comes from false teachers, especially proponents of prosperity gospel, which unscrupulously rides in on the backs of the work of previous orthodox missionaries who laid the groundwork for belief in Jesus, only for those beliefs to be hijacked and heretically corrupted in the name of personal gain, prosperity, and happiness.

Is Africa's moment over?  No, far from it!  In fact, it hasn't even arrived yet.  What that moment will look like and whether or not it will be to the advancement or detriment of historical, biblical Christianity, remains to be seen.  That, my friends, depends on the work being done, right this very moment, by nationals and foreign missionaries, throughout Africa, including Togo.

Posted by The Merry Band of Fife at 3:23 AM 2 comments

Living in the In-Between

I love watching my oldest kids growing into adults.  For too long, I was focused on what I was losing - my dependent child, gathered physically under my protective wings.  And don't get me wrong, letting go of that is HARD stuff.  I'm so grateful that I still have seven more kiddos to go, and I can't imagine what I'll feel when my last little ones approach that season.  But as the sadness recedes, I'm left with a sense of wonder, and a need to communicate the beauty of this season to my children.

Seasons of transition are hard.  Sometimes we have hour-plus conversations on how hard it is be in the "waiting period" of life - working towards a future that seems distant and somewhat hazy, but beguiling and enchanting.  In my new "advisory" role, as a parent of an adult child, I find myself dispensing sage truisms about keeping focused on the day-to-day and finding joy in the seemingly never-ending college days.  Ah, but then I realize I must preach those same things to myself every day.  How I need to be reminded most days!

Modern life often seems like a hamster-wheel of racing from one checkpoint to another. Life will TRULY begin after high school, after college, after getting a job, after buying a house, after marriage, after starting a family, after completing a family, after your last child leaves the nest, after retirement, after you get to the mission field.  And those are all potentially good and wonderful things.  God made us, unique amongst his earthly creation, with the ability to dream and plan  But how easily, in our corruptible earthly bodies, are our eyes and hearts turned away from The One Who Knows All Things as we ask him to proverbially hold our jackets while we get to work and that once we've just Arrived, we will be ready for him.  Of course, that's a lie, and a most dangerous one indeed.  We've arrived the moment we were given a regenerate heart! None of this human striving makes us one whit more precious in his sight.  And too often, if you are anything like me, the striving serves as a mighty fine distraction at best and at worst, a source of a low, but steady grumbling spirit that destroys joy.

Instead, sisters (and brothers too, although I do think this is often a weakness that women are uniquely drawn to) let us focus our hearts and minds on Jesus Christ and treasure his Gospel story above all other things.  Determine to know Jesus Christ and Him crucified every single day.  Let that be the water that slakes every thirst, the milk that nourishes your soul, and the wine that you delight in.