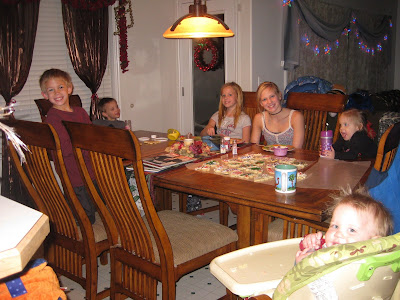 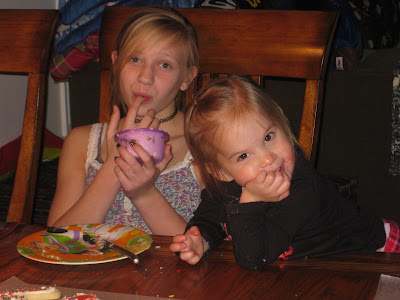 I made about a dozen different kinds of cookies this year, most of which I can no longer remember. But the most important, as far as the kids are concerned, are the Christmas sugar cookies. They are a staple, and the recipe is my Dad's. I underbaked them a touch this year (I didn't get around to them until the 23rd, so I was in a major rush) but they stayed soft for several days so it worked out well. Allegra, Ian, and Colin decorated, and Hero did too, helping Cecily at the same time. Frosting and decorating Christmas cookies is always an event that I have to remove myself from. Between the ahem, let's call them, "artistic" results (a pile of as much sprinkles as possible smack in the middle, although we have learned over the years and implemented a house ban on cinnamon imperials) and the nonpareils shooting off the table and winding up all over the dining room floor, it's just too much. So I set them up and don't return until after everything's done. Hero and Allegra ran clean up with the younger kids (which definitely involved baths) and I ran clean up in the dining room which involved some heavy-duty floor scrubbing.

Is that all you made, lol!