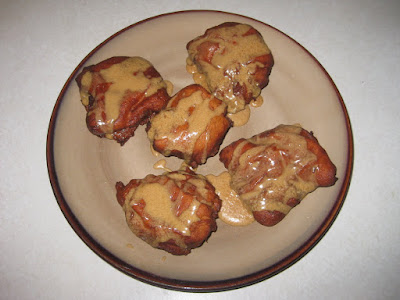 I totally set you up with my headline, sorry. My post is not controversial or even very interesting, but I hooked you in now, didn't I? I've never been to New Orleans and I've never been a big partier (unless that party involves Trival Pursuit and/or football), so Mardi Gras has never been a "thing" for me at all. But, I did chance upon a recipe in our local newspaper for beignets (similar to a fried doughnut), and I figured, why not? It actually served as a good segueway in to discussing the meaning of Lent (I miss growing up in an area with a strong Catholic tradition, because I love the meaning and deep sentiment behind Lenten traditions). My recipe was for Praline beignets with Cafe Au Lait icing and man - they were delish. Not pretty, at all, but positively scrumptious. I'm usually the pastry/dessert queen, but I limited myself to one, and James was the one who fell for them the hardest. And, on to my accountability report - today was a day where I felt more connected to the particular passages in Job that we read. Chapter 28 speaks about wisdom. As someone who prides herself on being conventionally smart (ha, that sounds arrogant, but bear with me) - it was positively a revelation to read verse 20-28.

Where then does wisdom come from? Where does understanding swell? It is hidden from the eyes of every living thing, concealed even from the birds of the air. Destruction and Death say, 'Only a rumor of it has reached our ears.' God understands the way to it and he alone knows where it dwells, for he views the ends of the earth and sees everything under the heavens. When he established the force of the wind and measured out the waters, when he made a decree for the rain and a path for the thunderstorm, then he looked at wisdom and appraised it; he confirmed it and tested it. And he said to man, 'The fear of the Lord -- that is wisdom, and to shun evil is understanding.'"

How comforting to be able to place my fears, worries, confusions, and doubts (and I'm a very doubting, analytical, look-at-it-from-all-perspectives type of woman) in God and know that wisdom is as simple as fearing the Lord and shunning evil. I can do that! Or at least I can try hard to, every day, and know that the rest is covered by grace.

Those sound AMAZING! For lent this year I'm giving up desserts (a really big weakness for me). Reading about this yummy treat doesn't help. :) My mom (from Wisconsin also) grew up Catholic so growing up I was usually challenged to give up something for lent. One year in dental school Brian and I gave up TV...that was hard too.

Can I give my virus up for lent, lol!