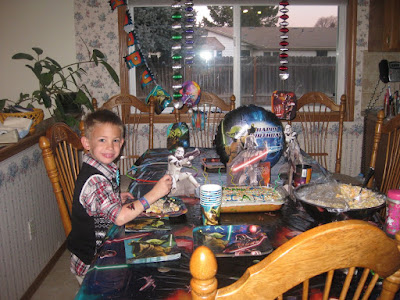 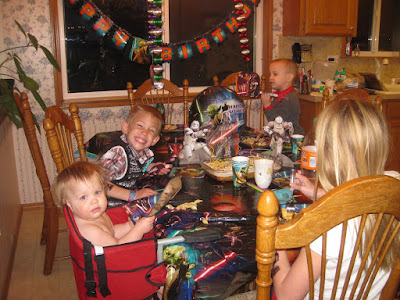 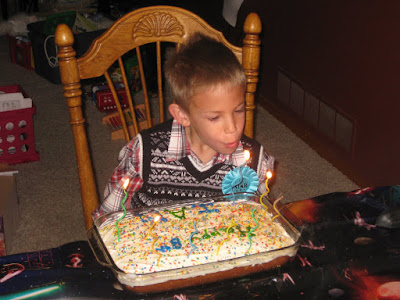 Ian turned 8 on February 5th. It doesn't seem like such a big jump from 7, so I'm okay with it (yes, I'm deluding myself into thinking that I have a modicum of control in these matters). He chose to go to Golden Corral for his birthday lunch (which happened on Saturday, due to church) and he was most enthused about the chocolate fountain and cotton candy. I was most enthused that we got out of there without any broken dishes or spilled cups (okay, that makes it sound like our kids are the terrors you hear about running through restaurants, screaming, and throwing food - that is not at all the case, but we did have a broken plate once and spilled cups do seem to happen with too much frequency). On Sunday, lots of church folks wished him Happy Birthday, and then he got to spend the entire afternoon (while his parents cleaned, his sisters skated, and his little siblings napped) playing Wii. This might sound like no big deal, but he's been on Wii quarantine for less-than-stellar chore performance for the last two weeks and the entire month of February and was given a special maternal dispensation to play on his birthday. After being in Super Mario Bros heaven, we went over to Nana and Papa's house for birthday festivities. He choose a Star Wars theme and, get this, all he requested for his birthday supper was Ham and Cheese Salad (pasta shells with chopped up Colby cheese, ham, and mixed with mayonnaise and miracle whip, with a dash of celery salt). I kept prompting him to think of something else, but that's all he wanted. So, we had a dinner of Ham and Cheese Salad, followed by -his choice- a funfetti cake with funfetti frosting and cookies and cream ice cream. He was so excited about his Darth Vader alarm clock/radio, Uglydoll, DS and Wii games, Mario chess set, and gift cards. He's his father's child, in that respect - easy to please on his birthday. Not like me at all, right James? ;-P

A boy after my own heart! Got to LOVE the funfetti cake, funfetti frosting AND cookies and cream ice cream. Yumm! Sad we all missed Ian's day. Happy birthday to a very special nephew!

Happy 8th bday to our first grandson, Ian! Ham and cheese salad, what a good WI meal, I know it's James' fav...lol. The StarWars theme must come from his Uncle Troy. Your not so bad on your bday hon, at least not to us!