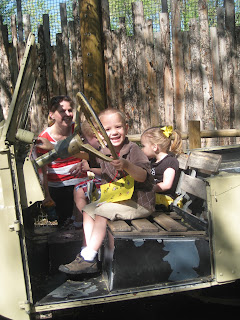 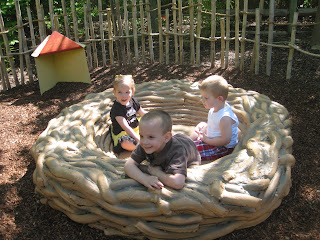 Every spring the Fifes make a pilgrimage to the zoo.  It's a forced outing, because it's done for preschool, but it is a milestone that marks the beginning of the end of the school year, for sure.  It's hard to believe that this was Colin's final year at Shepherd of the Valley, although Cecily will be back next year.  Colin had the same teachers for his 4 year old class that both Allegra and Ian had, so we feel like we know them well.  This year we had the added bonus of inviting family along - my sister-in-law Kimberly came along with her two little boys, Connor and Landon.  The cousins haven't spent much time together, since they live out-of-state, but we did manage to get some of them together for a few pictures (the zoo and especially the big giraffe slide is rather distracting LOL).  What a lovely day it was, too, which makes it a bittersweet final day to the first chapter of my life (later in the evening I would speak to my mom for the last time before she passed that night).

Glad to see you out and about. Looks like the kids had alot of fun together. Mom would want you to enjoy life.Cherish the memories. Love Dad