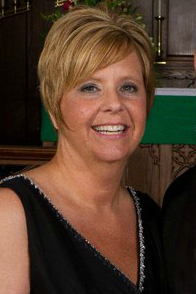 She was born February 10, 1962 in Milwaukee, daughter of the late Arthur and Lois (Stoddard) Stieve. On August 22, 1981 she married Thomas Plautz at Trinity Lutheran Church, Mequon. He survives.

Lauri was the fortunate soul who found true love early in life and the 30 years she and Tom enjoyed together served as an inspiration to all those around them, most especially the other three loves of her life - her children. Her primary focus was raising her children, but she still managed to express her creative genius and impeccable taste through careers in interior design, and, later in life, as an award-winning jewelry designer. Lauri was a devoted grandma to her six grandchildren, who adored her, and couldn't wait for the addition of more. An appreciation of beauty, a love for God and people, and an unbending sense of family were the hallmarks of her incomparable character.

Lauri and Tom were passionate travelers and avid campers. They loved nothing more than a weekend of camping with friends, trips to their original honeymoon destination, Mackinac Island, visits to their Idaho grandchildren, and the dream trip they finally made to Hawaii to celebrate their 25th anniversary.

Memorial services will be held at 4:30 p.m. Saturday, April 28, 2012 at St. Mark's Lutheran Church, Wausau. The Rev. Chris Sansom will officiate. Friends may call on Saturday from 3:30 p.m. until the time of services all at the church.

In lieu of flowers a memorial has been established in Lauri's name.

Melissa, I am a lurker on the LF board and think highly of you. So very sorry to hear about your loss. Thoughts and prayers for your family.

I am so sorry for you all and the sudden loss of your beautiful, young mother/grandmother. Praying that you are finding comfort as a family and getting back into the routine of life.

I am so very sorry to hear this Melissa. I will be thinking of you and your family and praying for you all during this difficult time.