One Room at a Time

I have tons of plans to update and remodel our home. That's the problem. I have tons. Which translates into tens of thousands of dollars that we don't have, and so we do nothing. We've decided to revise our way of thinking and instead to tackle things one at a time. This year's project was redoing the music room. The area rug in there was ruined and I didn't really care to spend several hundred dollars on a new one, but the carpet underneath was ruined. And that brought my attention to the furniture, which I liked, but was sadly showing its age and wear by falling apart. So, we decided to take the plunge and recarpet and "refurniture" the music room. It's the first room as you walk into our front door, and it's where I teach, so it very much leaves a first impression on guests. I wanted a thick, comfy, stain-resistant, durable and neutral carpet and more neutral furniture than the modern Todd Oldham stuff we had. I also wanted to move away from the green and brown color scheme and more towards an "oceany" color scheme with blues, creams, sands, abalone pearl, and driftwood brown. We found a very neutral loveseat at the RC Willey parking lot sale, repurposed my wicker deck box/seat that was in the living room (I've always used it inside, mostly for it's storage, and because it's too pretty to be outside) to serve as extra seating and violin case storage, and viola! It's still not done - I have a few more blue accessories I want to add in, and I need to change the window treatments, but you get the idea. Yay for remodelling - I can't wait to move onto the next space. 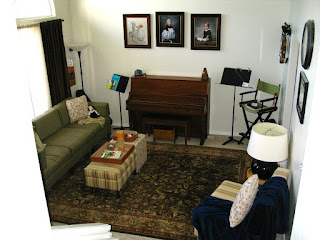 Before, from the stairs 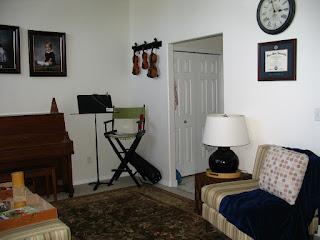 Before, from the foyer 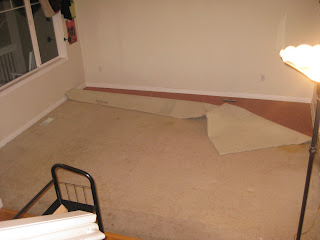 During the carpet tearout (we did it ourselves, because it's fun to destroy stuff LOL) 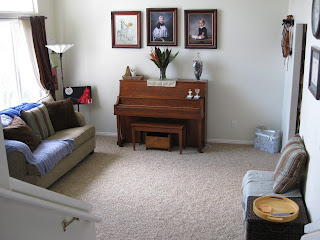 After, from the stairs 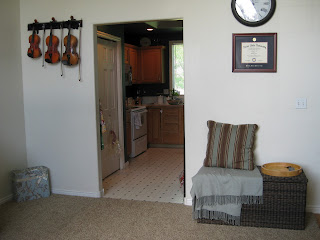 After, looking towards the kitchen 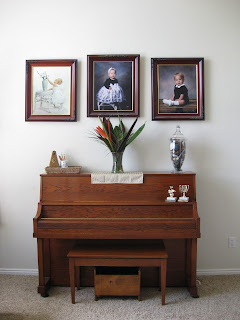 After, doesn't it look like we only have three children?  All of the kids have had their portraits done, but we're still working on paying off the bill with the photographer (they are very expensive, which didn't seem like a big deal with the first one or two) - someday I'll have all six up there 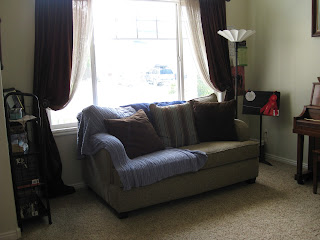 After, unfortunately the frong window is so bright that it's hard to see, but you get the idea (yes, I desperately want new drapes - I'm thinking of doing a pale blue velvet and seagrass shades (although I don't know if they make shades big enough for that window as it's huge and then the arch window above might look kind of silly being bare)

Hey Miss, It actually looks bigger and more room. Your Mom would have loved to help. It sounds like you have most colors taken care of. It will look great either way. Love Dad