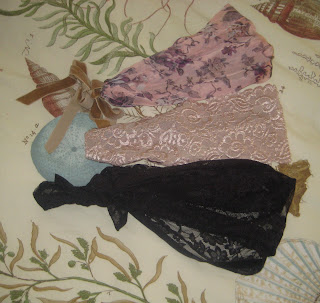 I don't think I could have articulated very well why I cover my hair at church when I first started my journey, which was back in November.  I knew the scripture that addressed it, 1 Corinthians 11.  But I wasn't sure why God was speaking to me on such a "strange" issue.  Women don't cover their heads in my church.  I've never attended a church where they do.  My exposure to head-covering has mostly been to the Amish and Mennonite women who lived in the countryside surrounding the area where I grew up.  But for the better part of a year, the issue just kept gently popping up into my consciousness.  And so I dove in, and since doing it, my convictions about it have grown.

I've learned that I don't do this for self-righteousness.  I wear headcoverings that are very "modern", and, to most, would appear as just wide fabric headbands or scarves.  That is important to me, because I'm not doing this to display my holiness externally or set myself apart (at least not right now - perhaps God might lead me to that direction some day, but I'm convinced that that's not why I'm covering right now).  No one has ever said a word to me about it, as a matter of fact (although perhaps some have noticed by this point, because I haven't attended a service without a covering in the last 5 months).  And it's not about it being a neat "fashion" accessory.  It kind of was, the first few times.  But there's been many a time since when I've made a nice hairstyle for church, and, quite frankly, the covering doesn't look the best on it.  But I'm quickly reminded that that is not the point of this AT ALL.  I have three head-coverings (currently) that I wear.  They are dedicated to wearing for church alone - I will not wear them the rest of the week (I do believe that there is a clear differentiation to be found in these verses between public worship and private worship, which is why I do not cover at all times).  They are treated gently and put in a special place when they are done.  That's the practical side of it, which, for me, came first.  But since then I've studied and developed the theological side of why I cover, which is more interesting, I think.

The most common reasoning against head-covering is that the practice was uniquely cultural.  But I cannot agree with that in the face of the fact that Paul clearly says, at the beginning of the chapter, EVERY man and EVERY woman (my emphasis) and takes us through the universal order of creation.  He also speaks, in verse 2, of the praiseworthiness of holding to tradition.  I understand that what follows next is cautionary, because it's a reversal of Jewish tradition (male headcovering), but we haven't dispensed with THAT portion, and a lack of head-covering for men has been in force since the early church.  It seems disingenuous to scuttle one portion of it, specifically the part referring to women and the instructions for them TO cover.

A difficulty in interpretation of this text has historically been the confusion between what the word covering means.  The Greek word, katakaylpto, that is used to reference covering the head in verse 6 is a physical item, outside the body (a piece of some type of cloth).  This word cannot be properly used to signify that a woman's own hair is her covering (that word would be peribolaion, which is used in verse 5, but not exclusively).  It's still a bit muddy, to be sure, but the clearest indication, to me, that the word covering is a literal piece of cloth is that Paul's words simply do not make sense in terms of long hair being a covering itself.  One cannot remove one's hair when they are in private and put it on in public, as the scripture suggests.  And verse six is absolutely nonsensical in terms of thinking of long hair as its own covering.  Also, people have backed up this position with the notion that short hair was the sign of a Corinthian prostitute, but there really is no historical support for this position.

I hesitated a bit about putting this little part in, but I must share because it is simply too wonderful and Providential not to:  as I was considering how to articulate my reasons for headcovering (and this has been about a month in the making - I've had some requests to explain why I cover) - one of our sermons (and also a passage we were studying in the original Hebrew in our Hebrew 102 night class) was on Deuteronomy 6:4-9, known in Hebrew as the Shema, a Jewish confession of faith.  Verse number 8 reads: Tie them [the Lord's commandments] as symbols on your hands and bind them on your foreheads.  Headcovering for women is called also by Paul in Corinthians a symbol.  I cover because it is a good, godly tradition and symbol.

Finally, I cover my head because it's easy to do, and I'd rather err on the side of too much obedience than not enough.  And, on an issue like this, where context and translational issues are convoluted, I'd rather not rely solely on my lowly scholarship or intellect, but on the example of those who've come before - both the women that covered: Sarah and Rebekah, of the Old Testament, and the wives of some of the mighty "modern" men of God, like Katherine, Martin Luther's wife and the scholarly titans of faith who advocated for the headcovering of women in public worship including John Knox, John Calvin, Charles Spurgeon, Matthew Henry, Harry Ironside, and Charles Ryrie.  Of course I do not believe head-covering is a salvation issue. That would be silly and, even more than that, dangerous. But through his word and the work of his Spirit, I'm convinced that it's what he wants me to do.

I have felt I should cover my head, though I vary from stylish hats to head scarves. The reason I don't do it all the time is I want to please my parents, and by pleasing my parents, I am pleasing God.

Thank you for sharing, Moriah. None of my daughters cover, because I'm not yet sure whether the covering is something for married women only. Since the entire point of the headcovering is a physical representation of submission, I would agree with you that you are correct in following your parents' wishes at this point in your life. Although this covering journey was of my own volition, I made sure before I started that my husband was not opposed to it.

Thank you very much for sharing this! I have the conviction to that the Bible is stating that we are to use a covering for public meetings. It is a sign of obedience, of headship. Also may it be for God's glory and an example to the angels and not for style.