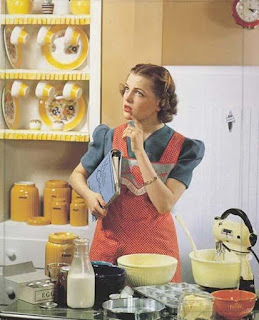 As I've become more of a follower of Jesus, and less of a fan, I've started actively seeking out Godly instruction and entertainment.  I love to read blogs, and I've tried to find some blogs that promote Christian virtue.  It's been a very enjoyable venture, but I've noticed a tendency amongst the Fundamentalist Christian woman set to turn the art of homemaking into an idol.  In the attempt to be countercultural (and that is difficult, I know!) I've seen women going way overboard - imputing an almost divine quality to the role of homemaker and mother that is, in my view, not biblical.  I think a society is stronger for embracing and valuing homemakers, housewives, and stay-at-home mothers.  And, as someone who is not conventionally employed, I understand well how it feels to be treated like a second-class citizen.  But we must be careful not to let our discontent with society push us towards forgetting that our role as women should not and cannot be our defining calling.  Our defining calling is Christ-follower.  Now, within that calling, God has clearly delineated "standard" roles for men and women.  Titus 2:4-5 has Paul giving these instructions for older women, who are to be mentoring young Christian women:

4 Then they can urge the younger women to love their husbands
and children, 5 to be self-controlled and pure, to be busy at home,
to be kind, and to be subject to their husbands, so that no one will
malign the word of God.
That's good stuff, right?  But the homemaker-worship crowd has added a requirement that simply does not exist in Scripture - that that must and can ONLY be done be being in the home all of the time.  Being a stay-at-home wife/mother is the easiest way to accomplish that, I would agree, and I think that lots of women would benefit, spiritually and emotionally, from staying home.  But it's not a biblical command.  President Harry Truman famously had on his desk a little sign that said "The buck stops here!".  When I hear the Titus verse, that's what I think of: not necessarily that women should be confined to the home in all circumstances, but that women are ultimately responsible before God for the state of their household (no matter how that household is ordered).  As I said, I think in general this is easiest accomplished if the women is physically present at home, more than not.  I know that God convicted me, early on in my days as a mother, that I would not be able to handle being a proper, Godly homemaker and mother without being physically in my home for the majority of the time.  But that conviction was personal.  It is not a command, and I can see my sisters in Christ who do hold jobs outside the home (for various reasons) being hurt and excluded when we try to make stay-at-home-ness a universal truth, rather than simply the easiest way to a godly life for most women.  I'm also seeing this homemaker idolatry absolutely paralyzing younger, unmarried women.  They feel that God can have no other calling for them outside of being a homemaker that they sit on their hands in their parents' home, waiting for their prince (and the expectations that they have for their prince are often unhealthy and set up their future husband, a flawed human being, for failure) to come, perhaps missing the call of the only Prince.  How do you know if you might be in danger of putting too much importance upon your ROLE as a homemaker, rather than who you are as a Christ-follower?  Read the biblical account of Mary and Martha (Luke 10:38-42).  Do you sympathize with Martha?  Do you completely understand her frustration with Mary?  Do you secretly think Jesus was perhaps being a bit harsh with her?  Be vigilant, my sisters in Christ, and remember Jesus' words to Martha in verse 42: but few things are needed, or indeed only one.

Another prime example of a "good thing" becoming an idol, eh? It's true. I have a Mary heart, but I still get so flustered by all the "Martha moments" in the details of everyday life - especially this season in life with three little kids. I need daily reminders that the reason I serve my family in the home is not about them, but about serving my SAVIOR. A happy husband and three darling little girls are my reward for obedience to HIM!

Despite my posts about spring cleaning, I'm actually not very Martha-esque myself. I like organization and tidiness, but I'm also able to just go with the flow. I decided to post it because some of the blogs I read glorified the art of homemaking so much that I started to feel like I was slothful and not worthy because I didn't grind my own flour and make all of my kids own clothes and wash all of my walls every week. Some of these women don't leave the house by themselves unless they are doing a family-oriented errand! As someone who feels like getting on the house, out of occasion, to be surrounded by good, godly women, is healthy and inspiring, I just can't fathom that way of life. I know, for example, that I will come back on Saturday as a more refreshed, better mom for having been off by myself for a little while.