Sprinkling of the Oats

I'm STILL stuck back in sharing Christmas pictures. But it's kind of fun to look at those pictures, with our super green, snow-free lawn and contrast it with now, covered with snow and frigid (and has been since Christmas evening). I'm going to be honest, Christmas Eve was rough this year. It didn't go smoothly AT ALL. I think I may have been guilty of saying "I so don't want to do this this year" at several points during the day. People were kind of cranky (and probably tired, because of school not getting out until the previous Friday, and Nutcracker weekend, and a funeral to attend the Saturday before) and everything that COULD go wrong, did (including but not limited to: a gift cheesecake that cratered, but it didn't end up mattering anyways, because the giftee ended up not being at home when we attempted to deliver it, and the tragic loss of Elinor's "Bumper" - her little orange and blue lovey blanket [this one still bothers me - it got lost at the Christmas Eve service at church and never resurfaced]). We ended up not starting our traditional movie night (it was Holiday Inn this year) until about 9:00 and I knew I still had Stollen to make afterwards (as well as a few other things for Christmas dinner). But we survived (and it was a good life lesson in not getting caught up in the "traditions" of Christmas that are fun, but should never be the focus of the season). Our kids have a fun little minor tradition of scattering oats with glitter in them on the ground on Christmas Eve for Rudolph and the reindeer. Honestly I think they just like running around outside in their Christmas PJs throwing stuff around. Ah, the way Christmas allows for normal house rules to be bent... 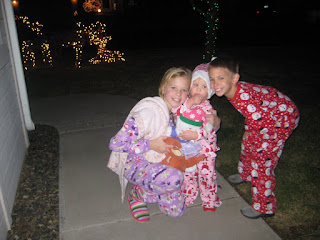 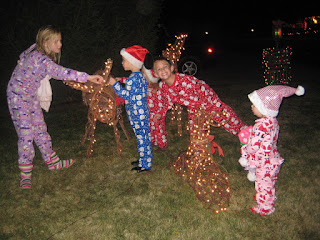 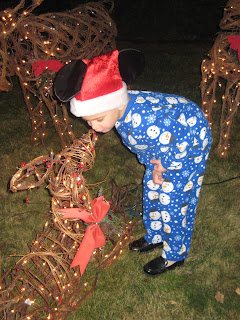 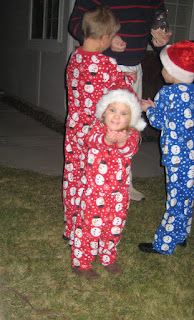 I love the pure, unadulterated joy on my Ceci girl's face 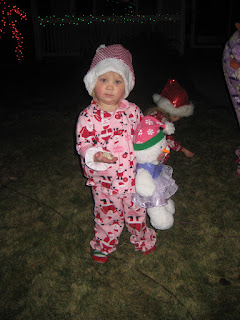 My little doll, Elinor, and her snowgirl toy, Noelle