I'm going to intersperse catching up from the holidays with current posts, so bear with me for a few days as I (hopefully) catch up. I wanted to make a special point to do a Modest Monday post, as I made extra sure to take a picture on Saturday because it was my casual weekender outfit (and something I have and would wear on a weekday at home as well) and I really love it! I think the color pairing of navy and mustard is classic but unexpected. I like the ease and comfort of the knit navy skirt (it's the only non-patterned, non black/khaki skirt in my wardrobe) and I dress up the plain mustard cardigan with a removable navy floral pin. You could also put the pin in your hair if you had a ponytail or French Twist in (for me, leaving my hair down is actually my "dressy" look, as it takes more work to do that then to put it up because I have to flat iron it). I wasn't wearing shoes in my pictures because we were getting ready to go out on a Costco run and I wore my winter Uggs, which are functional, but not exactly pretty, and the bottoms are covered in ice melt and that's a no-go on my newish carpet in my music room. 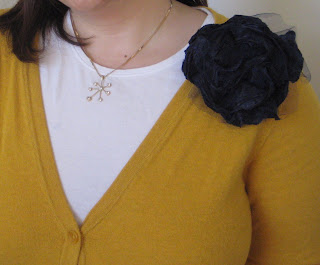 Here's a closeup of the corsage - wouldn't it also look pretty in a french twist or low messy bun?  It has both a traditional pin as well as an alligator clip, so it's super versatile.  Unfortunately I don't have a lot of navy in my wardrobe so I don't get much use out of it.  The necklace is a fave of mine too - it was my mother's, custom designed by her (and made by her goldsmith), a starburst pattern with seven diamonds which came from my Gramma's jewelry that my mom had reworked just months before she passed away.  So, it was "free" to me, but worth several thousand dollars.  I never used to "get" the love of fine jewelry.  I mean, don't get me wrong, I wouldn't turn it down, but it wasn't something I was into, for sure.  But I've really seen the upshot of it upon inheriting my great-grandmother, grandmother, and mother's jewellery after my mom passed away in April.  It's a tangible heirloom that makes me feel physically connected to the women who represent my past and everything about who I am, as a human woman.  The more I mature, the more I feel connected to my past.  Unfortunately, for me, all of the women on my mother's side are with Jesus now, so it's a bit of a bittersweet revelation.  How I wish I had treasured them so fully and looked to them for inspiration, advice, and stories when they were here and I took them for granted!  So, for me now, I hold onto my heirloom jewelry tight.  The women in my family had fine taste, and so they are worth quite a lot, but honestly that's not at all where their value lies.  Their value lies in their history and their sentimental meaning.  I know this because I also have a huge amount of jewelry that my mother hand-made and that is equally as precious to me, although worth a fraction of the "real" jewelry.  I thank the Lord that I have four beautiful daughters to pass these down to, and I hope that some day, as they mature into women, they realize the power, dignity, and beauty of understanding their womanly heritage through the generations.  It seems, at times, a daunting task to me, as a 34 year old woman, to take over the mantle of matriarch, but by the grace of God I will manage, and I pray fervently someday that my grown children will sing my praises as a woman of virtue (I'm doing a Proverbs 31 challenge right now, in case you can't tell - more to come about that soon!).

Just beautiful Melissa! Love your hair style too. I inherited one of my grandma's wedding rings for Christmas and know exactly what you mean. There is no real dollar value, only the sentimental value. What an honor it is to wear and another reminder for me that we take nothing with us to heaven. To not place too much value in earthly treasures but to live for and invest in the forever treasures in heaven. Have a blessed week!

Loved reaading this thank you