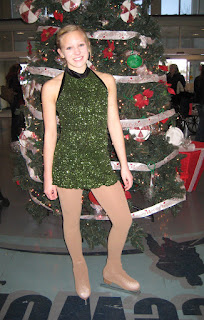 After many weeks of preparation, Saturday was finally the day of the Holidays on Ice skating show.  We don't actually get much chance to watch Hero skate, because of how our schedules work out, so it was fun to get to see her.  She progressed so much in a year.  Last year she was just part of a group number, but this year she was part of two group numbers and also had a solo to the Christmas song "Man with the Bag".  They make a big deal out of the soloists, introducing them as the stars of the show, and individually announcing them.  You can't help but feel a surge of parental pride when your child is called a star.  How Hero loves skating!  She wishes she could attend a full-time skating boarding school.  Because we are not millionaires, she's stuck with us and Idaho Ice World for now, but we just keep impressing on her that her hard work will pay off, in some way, in the future.  We've ordered a DVD, and I hope I can extract the video of her solo and put it online after the DVD arrives.

Way to go Hero, we are so proud of you! Love, Aunt Kimberly & Uncle Brian
p.s. Thank you for the pictures you colored for the kids :)