My head is in a fog this morning due to a cold, so hopefully this post is semi-coherent. This might be a recipe that you already know. I've seen it in multiple cookbooks, so I think it's more common. The recipe is a no-bake recipe, but that's negated, for me, by the fact that you have to use the stove to melt chocolate. The recipe is not very hard, but the chocolate covered marshmallows and nuts aren't the easiest to deal with in terms of shaping. As for the verdict on the end result - my younger kids were fans, but those of us who were older (including my 13 year old) were kind of like "meh, they're just okay". The marshmallow texture can be a bit off-putting at first. With that said, they aren't yucky tasting, by any means, and I think they would make a pretty, colorful addition to a Christmas Cookie platter.
Cathedral Cookies
1 cup semisweet chocolate chips
2 Tbsp butter
1 egg, beaten
3 cups pastel miniature marshmallows
1/2 cup chopped walnuts or pecans
1 cup flaked coconut 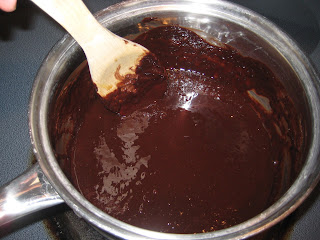 Melt chocolate chips and butter over low heat stirring occasionally.  Stir a small amount into the egg and return all to pan (you don't want to add a cold/room temperature egg directly into a hot liquid).  Cook and stir over low heat for 2 minutes.  Pour into a large bowl and let cool for 15 minutes.  Gently stir in marshmallows and nuts.  Chill for 30 minutes.  Turn onto a sheet of waxed paper and form into a roll about 1 1/2 inch in diameter.  Gently roll onto another sheet of waxed paper sprinkled with coconut and coat the entire outside of the log with coconut (I thought it was easier to work with two logs instead of one long one).  Wrap roll tightly, twisting ends to seal. 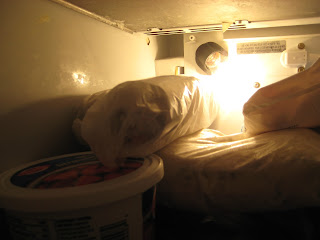 Freeze for 4 hours or overnight.  Remove waxed paper and cut into 1/4 inch slices. 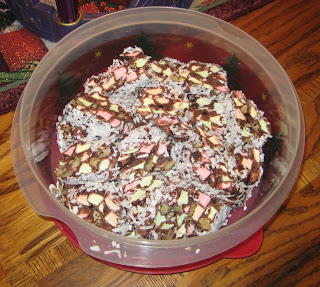 Store in an airtight container in the refrigerator (these cookies don't have a long shelf-life - 2 to 3 days after slicing, tops).  Yield: about 3 dozen