This was one of those "investment" parenting moments.  We tell our kids no a LOT.  I don't want them to grow up to think that their folks never let them do anything fun and slightly crazy.  So, hopefully we'll earn some interest on our investment years down the road - we have a new pet.  James was working onsite on Saturday, and had brought Ian along to get him out of the house, and in the sprinkler box he found a curious creature.  The homeowner was grossed out and did not want it in there.  So, the logical choice to do with an unidentified, slimy, underground creature is apparently to put it into an Eggo box and bring it home.  When I walked in the door from skating and was told that there was a "thing" in a box, I thought it was a joke.  James can be a bit of a jokester.  But, no, no they were not kidding at all.  In a box on my stove was a very strange-looking creature.  James and I were promptly informed by Hero that that was a newt - thank goodness for recent biology lessons in science class, I guess.  After a bit of research, we found out that we were the new foster parents for a tiger salamander.  Tiger salamanders are pretty popular pets, because they are very easy and very safe.  We needed time for a "mom and dad conference" and took a drive to talk about what we should do with him (we have no idea if it's a him or a her, so we went with him).  Said drive ended up at the pet store and $60 later we were the proud owners of a terrestrial salamander set-up (basically a really long 20 gallon aquarium, a soaking bowl, coconut fiber bedding, and refrigerated wax worms).  As we drove up to the house, there were literally twelve sets of little eyes staring out the window at us, to see what we'd decided.  Even Hero dropped her normal teenage nonchalance when we walked in with the supplies.  So, Augustus (affectionately called Augie) the tiger salamander has officially been adopted into the Merry Band of Fife.  Because we were running a bit low on the crazy, of course.  What a life! 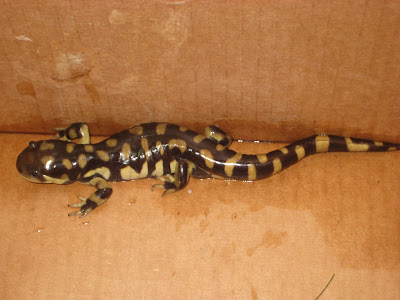 I loved listening to the kids excitedly tell me about their new pet on Sunday. My brother had frogs, newts and hamsters as pets so I think it's great for the memories they are making!

How fun! Before we had kids we had some pet salamanders. Actually, we just had them at home during summer breaks. That's what you get when you're married to the Biology teacher. Now it's crayfish in our tank. Ew.

I love salamanders! I used to catch them all the time as a kid. You'll have to let me know how they are as a pet. My parent's never let me keep the ones that I caught...I wonder why ☺.