In my introductory post, The Christian Straw Man, I opened up a discussion about the ways in which Christians are manufacturing a culture war that is unnecessary and counterproductive in our efforts to bring light to our specific corner of the world.  Now I'd like to talk about how this phenomenon plays out in very specific areas, and what impact it's having on our witness.

I'd like to open with the subject of Modesty in Attire.  Modesty is a broad concept that touches all realms of life: spiritual, emotional, mental, and physical.  There definitely should be discussions about spiritual modesty, emotional modesty, and mental modesty, but I'm going to focus on the aspect of modesty that I think is most closely aligned with The Christian Straw Man - modesty in dress and, to a lesser degree, behavior.  From the get-go, there's going to be issues.  Christianity is not a monolithic religion.  We all (I should hope!) rely on the Word to guide the choices we make.  And there are a few mentions of modesty in the New Testament.

Likewise, I want women to adorn themselves with proper clothing, modestly and discreetly, not with braided hair and gold or pearls or costly garments, but rather by means of good works, as is proper for women making a claim to godliness. 1 Timothy 2:9-10 NASB

Your adornment must not be merely external-- braiding the hair, and wearing gold jewelry, or putting on dresses; but let it be the hidden person of the heart, with the imperishable quality of a gentle and quiet spirit, which is precious in the sight of God. 1 Peter 3:3-4 NASB
You see the emphasis, in the scriptural discussion of modesty?  While there is a component of physical dress, it's greatly overshadowed by the workings of our heart and mind.  I think that holy "imbalance" is important.  If you tilt too far in setting up your own standards of modesty as tests to "true Christianity" and proudly judge everyone by your own standards, attempting to shame those who dress inappropriately (whether it's categorically inappropriately or a matter of small differences), perhaps you are not following in the Word.

I often see blogs from Christian sisters who are considered leaders, proud to call themselves Titus 2 women.  And, in those blogs, they use the most disgusting language to vilify women who dress inappropriately, language that I don't think is appropriate for any Christian to use when describing one of God's beloved children, lost or found.  I'll never forget a casual discussion I had with my mother when I was a young teenager.  I attended a Christian school and my entire Christ-following family was heavily involved in church.  I referred, rather off-handedly, to the clothing that a particular girl was wearing as slutty.  My mother was not prone to anger.  But that was one of the few times that she was filled with fury at my self-righteousness, pride, and lack of a proper perspective on my own sinful nature.  You see, she had a difficult upbringing, ruined by an extended period of molestation by a neighbor, that led to a young girl who turned to drugs to numb the pain, and eventually had premarital sex that resulted in a pregnancy at 16.  She, a scared, lonely, and damaged girl, was shamed and described as "trashy", a "slut", a "whore" and all sorts of other unspeakable insults.  None of those people were interested in helping her - they couldn't see beyond her visible sins.  Her words were gentle but firm as she reminded me that words carry incredible power - the power to lift up, and the power to condemn.  I've never felt so ashamed in my life as I did that moment at the age of 14 or 15, when my mom taught me that lesson that's stuck with me my entire life.  No Christian brother or sister should ever let those insults come from their lips when they are making a statement simply about what a girl or woman is wearing. 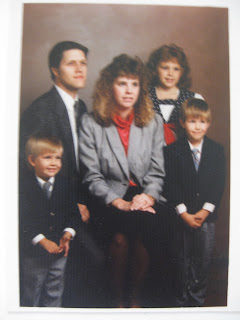 My mother, in a family portrait circa 1988, who taught me my earliest lessons about modesty of dress, and, more importantly, gentleness and beauty of spirit

Frequently I hear mothers complaining that they can't find anything appropriate for their daughters to wear.  Being a mother for almost 14 years now, and having to shop for four daughters, I say what you have is a case of self-fulfilling prophecy.  People WANT so badly to believe that The Christian Straw Man is real, that they see things selectively.  They see the short shorts, and the tee shirts with snotty sayings on them, because that provides ammunition for the culture war they think they are righteously fighting.  They simply fail to notice that there's a plethora of other options, because that doesn't fit well with their preconceived notions.  I remember reading once that, when people have strongly held opinions on a subject, it's been researched and scientifically proven that they filter facts accordingly - choosing to only absorb that which supports their currently-held opinions and ignoring that which contradicts them.  I can't walk into a store and guarantee that you will not find something that is inappropriate for a girl to wear.  In fact, it's probably likely that you WILL find something.  But there's also plenty of modest girls' apparel (unless you prefer an ultraconservative standard of modesty, closer to Amish than Duggar).  If shorts and pants are an option, bermuda-length shorts and/or capris are pretty much a staple in any store.  If you are skirts only, I've seen longer skirts available from places as varied as Walmart to Gymboree (I'm a big fan of Gymboree clothing for little girls, because I love the sweet "little kid" look and I can't fight my urge to be very matchy-matchy).  I shop a lot, between my own household needs, and supplying my online clothing store.  I shop at thrift stores, resale shops, big box stores like Walmart, Target, and Fred Meyer, department stores like Kohl's, Macy's, H&M, and Dillard's, children's stores like The Children's Place, Gymboree, and Justice, and catalogs like CWD, The Wooden Soldier, Chasing Fireflies, Mini Boden, and Hanna Andersson.  There's always options at some, if not all, of those places for modest girl's clothes.  But I suspect that's really not what people are trying to say when they bemoan the "fact" that they can't find appropriate girl's clothes.  It's another symptom of misplaced and dangerous nostalgia.  As if the fact that people used to wear more extensive clothing meant that the world was safer, more pleasant, and more godly.  During the Industrial Age, the fact that women wore long skirts and layers of undergarments was cold comfort for children forced to work, not infrequently to the death, in factories.  At the last midcentury, the fact that women didn't wear short-shorts or tube tops in public didn't offset that men (often self-identified Christian men) lynched black men in order to hinder their fight for civil rights.

Gymboree 2013 - I actually have the yellow apron dress for my littles, and the tiered cotton dress is from the older girl's line, and would be super cute with a cardigan over or tee underneath it.

Old Navy 2013 - the sweet red toddler/preschooler dress is vintage-sweet and would look super cute with a pair of yellow cropped leggings underneath, and the older girl's knit maxi dress could work all year-round with proper layering.

Walmart 2013 - The monochromatic mixed media on the orange dress appeals to the older girl and tunic tops and leggings are so practical for active little girls who like to be outdoors (mine!)

I grew up in a modest household.  My mother was a stylish woman, but always on the side of elegance (permed hair aside - what can I say, it was the 80s). But any lessons I learned in what type of clothing I wore was always in proper proportion to what I learned about where our true value as women of God lied, and never at the expense of cursing or belittling others.  It would be nice if the Bible outlined a very specific list of the "Christian uniform".  But it doesn't and so we humans are left with modesty as an issue of discernment (which hopefully involves seeking and allowing the guidance of the Holy Spirit).  There are certainly some things which Christians, nearly universally, agree are immodest.  But, as soon as you start eliminating obvious choices like nudity and bikini-tops and miniskirts in inappropriate venues, the more variation you will see in what constitutes modesty.  For some, their dress will reflect American culture, just avoiding problematic extremes and excessive vanity.  Others will shun anything that seems to be fashionable and stick to long skirts and loose blouses.  And there's lots of lots of folks who fall somewhere in between.  The desire to beautify our environments is a very common feminine trait, so it's entirely natural (and fun) to talk about what we like, how we dress, what we like to improve in our dressing habits, and so on.  But when it leaves the realm of "this is how I've felt led by the Holy Spirit to dress my family" and enters into hyperbole about how there's no modest girls' clothing available and people start making character judgements of complete strangers, posting pictures of them on the internet, and tearing them down for sport amongst Christian sisters, I'm concerned that we've really succumbed to nostalgia - for the days of the Jesus' contemporaries, the Pharisees. 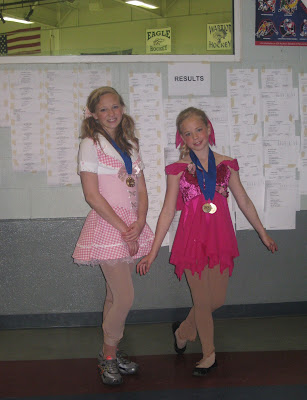 My two oldest daughters, who are competitive figure skaters, in typical competition attire.  They wear short skirts over tights.  This Christ-following family has determined that this is acceptable in the eyes of the Lord.  While I think it's fine for another family to feel led differently, I would be appalled if they posted a picture of my daughters like this and proceeded to impugn their character based on their sports attire.

Thank you for sharing. I stopped over from the Modest Mom. Modesty is not a whole lot of good if there isn't a transformation of the heart. If we have no inward beauty in Jesus what use is looking modest on the outside. Thank you.

Wow. I was blown away by this post. As someone who has very similar views to your own regarding modesty I think you speak the truth. People find, or don't find, what they are looking for. Thanks.