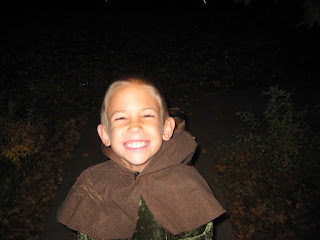 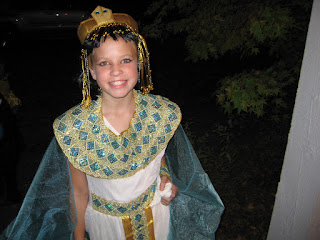 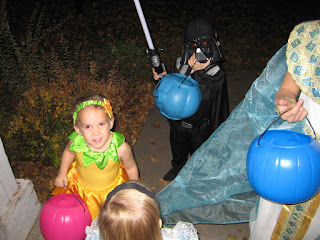 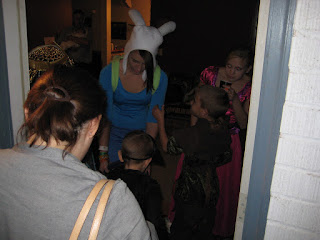 I'm so angry with myself - I took horrible Halloween photos.  It was a busy, busy night, but still, I should have done better.  Now I don't even have any pictures of Elinor as Alice in Wonderland.  It's so hard to find a balance some days between LIVING life and DOCUMENTING it.  Halloween coincided with Family Night at church, so, after much discussion, we decided to change up plans this year.  Instead of trick or treating in our neighborhood, we headed over to church for a chili dinner and mini-Awana, and then over to Nana and Papa's house for an abbreviated trick or treat session in their neighborhood followed by some food and drinks (usually we do hot apple cider, but it was super warm on Halloween this year).  Our candy consumption was much reduced, I do have to say.  As I mentioned already, Elle was Alice in Wonderland, then Cecily was a sunflower, Colin was Darth Vader, Ian was Robin Hood (he was a bit put out about his costume, because we didn't get him the real bow and arrow set he wanted with it - yeah right), Allegra was Cleopatra, and Hero was Princess Bubblegum from the tween/teen cartoon Adventure Time (she trick or treated with her cousin, Oriana, who was "Fiona" - a female version of the main character, Finn).