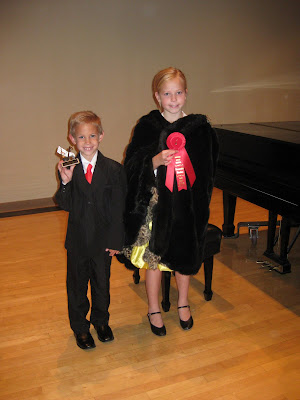 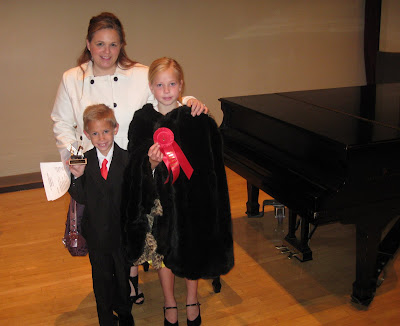 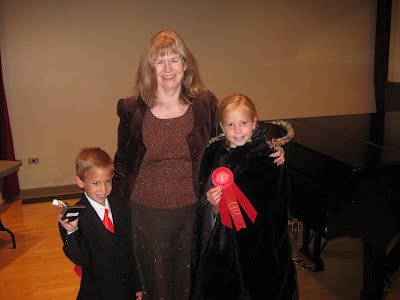 We've been competing in the big annual Sonatina festival (it always happens in early November) for a few years now. It's very competitive - children compete in one of 15 different levels, all playing the same piece, and a judge selects a few for honorable mention, and the top two, who go onto a recital (on the Steinway in the Morrison Center Recital Hall, yay) that night where they play again, in front of a large audience and more judges and are awarded either first or second place. Hero won first place, once, several years ago, and has gotten honorable mention twice. It's always a stressful thing that they spend months preparing for, and some years it's went better than others. By and large, this year, it was a great one. Allegra really challenged herself by choosing a difficult piece and received an Honorable Mention (usually I wouldn't be overly enthused with that, but her level was tough AND she squeezed a full Nutcracker rehearsal in as soon as she finished playing) and Ian, aka the smirky one (hence the chipmunk teeth - I swear they aren't that "bucky" in real life LOL), earned a trip to the Honors Recital, where he nailed his piece and took home the First Place trophy. He was insufferable (just ask his big sisters) for several days afterwards, but, hey, I guess he earned it. It was great for him to get to step out of the shadow of his big sisters for once.

They definitely get their music talent from me, haha!