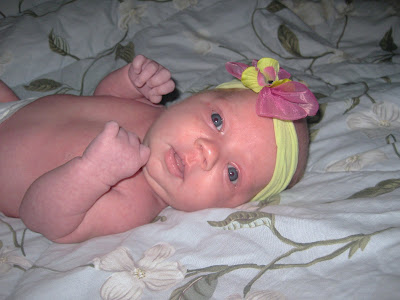 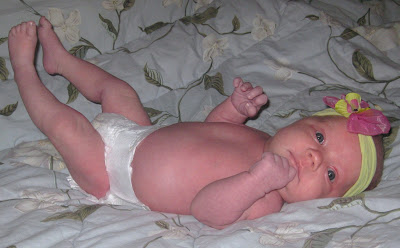 This blog is getting a bit schizophrenic with the constant jumping back and forth in time, but I haven't downloaded the wedding pictures yet (and there are a TON to go through) and if I don't get Elinor's one month pics on soon, she'll already be two months old, so forgive me. I have no idea what Elle weighs but we think she's doing well as she's really filled out and has outgrown her newborn stuff and her three month clothes is getting snug. She eats like a maniac and doesn't sleep all that much. No schedule as of yet, but hopefully that's coming. Her eyes are still a very bright blue and I can't get enough of them after three brown-eyed kids. She had her first smile on Tuesday, August 31st, which is always such a huge, happy milestone. Hopefully soon they'll be frequent enough that I can get a picture of her smiling.

Oh gosh, she's beautiful but who does she look like? Can't wait till I can get out there and hold her again. Catch a smile pic soon please!