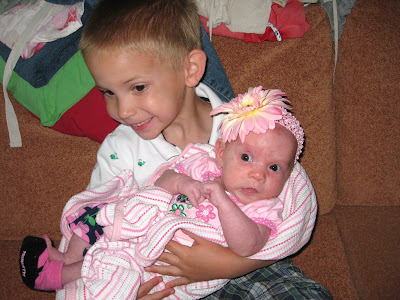 What's the fun of having another baby girl if you can't indulge in a little dress up action? Hopefully the huge flower can distract from the baby acne. Just when it gets a bit better she breaks out again. Other than that I promise she's a cute baby LOL. Cecily's been a slow gainer, but as of Tuesday she weighed in at 8lbs 5.5oz, which isn't too bad. I experimented for a week with a dairy-free diet per the pediatrician's recommendation (to see if Cecily had an allergy) - boy that was tough. Luckily I'm getting to reintroduce it slowly as it didn't seem to improve her rate of weight gain. I can do substitutes for milk and butter, but there is nothing that can replace cheese, I've found. At any rate, the pediatrician feels like she's doing okay and she won't have to be seen again until her two month appointment. She gets to have her first big holiday this weekend, although I'm sure she won't be particularily impressed by fireworks. If it's a nice day maybe we'll take her for a short dip in the pool.

We cannot believe how big she is already and oh so cute! Thank goodness she is gaining weight, looks like she'll be like her grandpa in that respect not her grandma, lol. Miss you guys tons, hugs and kisses all around.