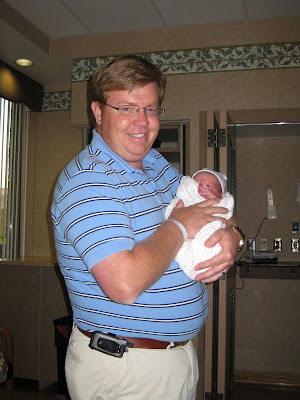 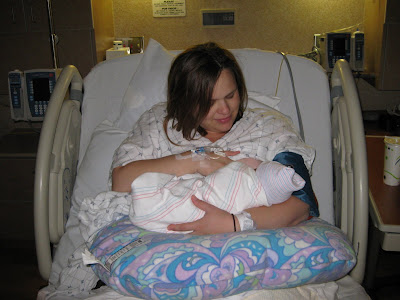 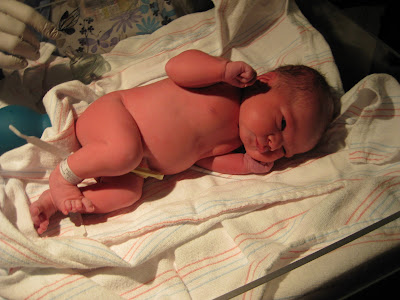 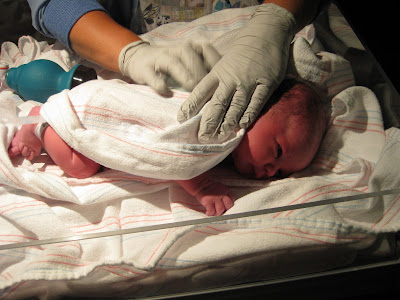 Our precious little baby has finally made her debut. After a changeless doctor's appointment on Monday and the scheduling of what I thought was my inevitable induction (for May 28th), I started feeling like things might be happening on Tuesday afternoon. On Tuesday night I had my regular routine of nightly contractions, but when we got in bed at 11pm they wouldn't go away. So I got up, showered, and went downstairs to watch DVR'd episodes of A Baby Story because whenever I sit down and watch tv contractions tend to go away. These didn't - they were a little bit stronger than normal (nothing too much though) but very regularily 4 to 6 minutes apart. After timing them for about an hour I decided it was time to wake up James. We left for the hospital around 2am and when they checked me they said I was only 4cm dilated. I knew that I was in true labor at this point and the contractions started intensifying rapidly. I tend to be like that - I go from very manageable contractions to killers within the span of 15 minutes or so. Because I was in so much pain, they checked me again in 10 minutes and I was at 5cm, so they admitted me. After that the next hour and a half was a blur of pain as they did the admission process and put the iv in. Finally around 4:30 I got the epidural and it was wonderful. As soon as it was in they checked me and I was dilated to 9 cm! We started pushing around 5, and it seemed like nothing much was going on but all of the sudden the baby's head popped forward and she was crowning. The nurse ran out to get the doctor, and two pushes later Cecily arrived in the world. She was born on May 20th, 2009, at 5:47 am, weighed 7lbs 5oz, and was 20.5 inches long. It's so amazing that the feelings you get the moment a new life arrives are no less life-changing whether it's your first or fifth. She was instantly ours and we adored her (yes, there were lots of tears). Welcome to the family, Cecily Carys!

Congratulations on your sweet baby girl!!!