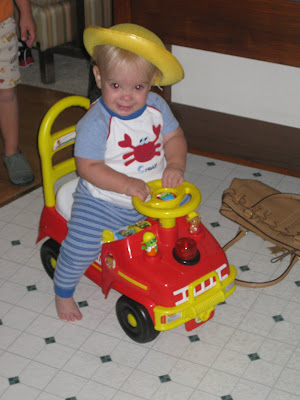 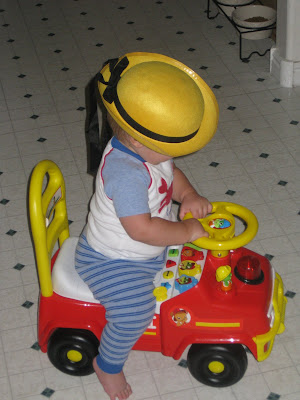 Colin loves hats. I think he might get this from Ian, who proudly wore his huge Captain Hook pirate hat with tall feather for about six months straight. Colin, being only 15 months old is not overly picky about what kind of hat he wears. This weekend we caught him cruising around on his firetruck wearing a dress-up Madeleine yellow hat complete with long black ribbons. He thought it looked just his size. :-)

Costume Update: The pressure's on as September is almost over. The chemise is done (the sleeves took a little while to do because the openings are so small) and it's on to the pantaloons. Those shouldn't be too difficult other than some fancy pintucking at the hems. I can do it,
I can do it, is my mantra, LOL.

Colin really looks so cute in yellow. Grandpa says he's going to have to buy the boy a Packer cheesehead though!