After the adults in the house were felled by a nasty, lengthy illness, we are finally on the mend (knock on wood), so its on to catching up with our vacation pictures.  We did so much, but we didn't actually take a lot of pictures (which was fun in the moment, but a bit of a bummer afterwards).  Our activities started bright and early the morning after we arrived with a trip to Bletsoe's cheese factory for some curds and string cheese, and then the big girls and I got our hair done, on Friday I drove over to Appleton and met up with some friends for lunch and light shopping, and that evening we had Cheesy Brat Stew and then Dad took all of us to a frozen yogurt place to "celebrate" the kids' birthdays.  Saturday was probably our most relaxed day - the Stieve uncles, aunts, and cousins came over for a brief visist, Dad treated James and I to an anniversary dinner date at Pinewood Supper Club while he babysat (with the help of some aunts and uncles) and then we took the girls skating.  Sunday we went to church (an outdoor polka service!) and then the rest of the day was Grandma Plautz's surprise 87th birthday party, which was a great opportunity to meet friends and family on the Plautz side.  We had loads of fun with the Photo Booth, which Becky and Troy did a test run of.  Originally we were supposed to go to Noah's Ark waterpark on Monday in Wisconsin Dells, but after some bad weather was forecasted (which, of course, didn't happen), we decided to do the Deer Park, the outlet mall, and Marley's (a Caribbean themed restaurant) and then Tuesday was the Noah's Ark extravaganza.  It was really fun, and the day just flew by (yay, I got to actually ride on fun rides!).  After that we drove over towards Milwaukee and spent the night at friends of Dad's, who graciously allowed all of us to descend upon their lovely home, before going to the Milwaukee Zoo on Wednesday with my cousin, Courtney, and her two boys Oliver and Henry.Whew, I feel tired just writing about all of this, so hopefully you can imagine how busy we were.  Time to break for some pictures and the second installment will come tomorrow. 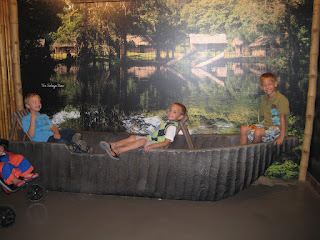 Colin and Ian with my cousin's son, Oliver, at the zoo 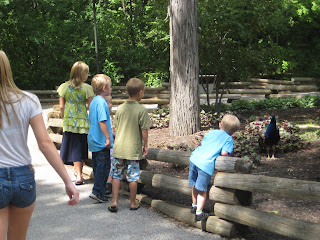 The kids hassling a peacock (I promise, they didn't get any closer than that) 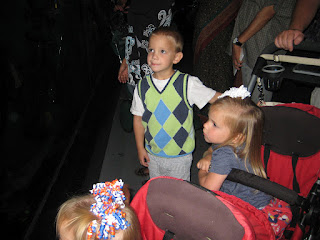