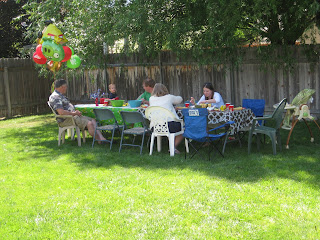 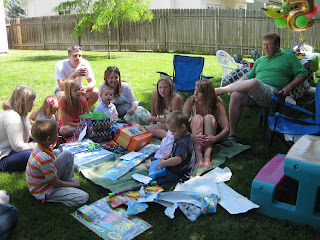 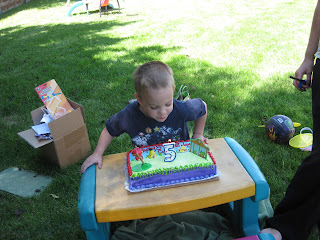 I believe the next order of business is Colin's 5th birthday.  Five both sounds little and big at the same time, if that's possible.  Big because it means he's starting kindergarten, but still, five really isn't old at all if you think about it.  The years have flown by, because Colin was the start of the "second half" of our family - the last three kids - and they happened in such quick progression.  He was very proud to be five (although he insisted his birthday wasn't on June 6th, but instead was on the following Sunday, party day).  After a lot of waffling he finally settled on having an Angry Birds party (in all honesty that should probably be MY birthday party theme - I'm always happy to be left in the car with James' phone so that I can hone my mad Angry Bird skills).  We enjoyed a barbeque (brats for the sophisticated, hot dogs for the plebes), an absolutely gorgeous afternoon of relaxing in the backyard, and some cake and fellowship with family.  Late spring birthday parties are so easy, I have to say.