He is Risen Indeed! 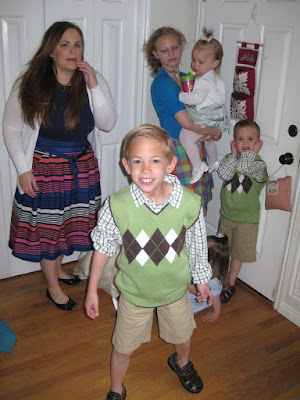 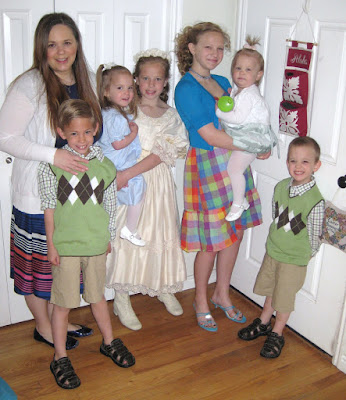 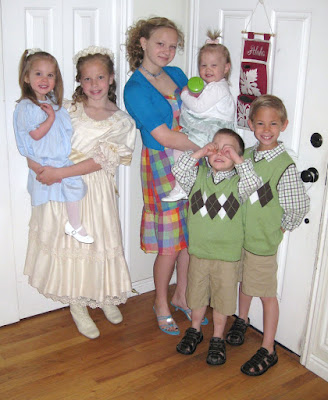 Easter was so stressful! I let too much of the nonimportant stuff get to me, I know, but it seemed llike one disaster after another. First of all, James had to close on Saturday night, so he wasn't home until 12:45, and we stayed up til 2 finishing up stuff, so we were both rather tired. So we started the day with four hours of sleep and immediately the list of "seriouslys?" started.

#1 - The dress I planned to wear had a broken zipper, which I didn't discover until I was trying to put it on, five minutes before we had to walk out the door - so a complete change in plans was necessary. Luckily we made it to church only two minutes late.

#2 - While at church, James spilled coffee all over himself and the chair and my Bible cover. He had just a small cup, but it looked like he'd dropped an entire coffeepot. When I came back to our row to sit down after playing in the orchestra, my seat was covered in coffee, so James had to sit on the end all by himself.

#3 - Where, he apparently couldn't stay awake, due to the aforementioned four hours of sleep and lack in coffee. Nothing says "God is glorious, let's praise His name" like having to elbow someone 20 times during the message to make sure they stay somewhat awake. I'm not sure who the devil was working harder at getting - him or me LOL.

#4 - I hosted Easter dinner and it was a disaster. The timing was all wrong, and although everything tasted good, we didn't get to eat until 3:30, an hour after I had planned. We didn't have enough refrigerator room and the backyard didn't get cleaned and the gazebo top didn't get put up so we couldn't eat outside, but there wasn't enough room inside, so we sent the kids outside and the adults ate inside.

#5 - Our dishwasher really was acting up, so I had to wash and dry all the dishes by hand (my hands were bleeding by the end of it all, because hand eczema and dishwashing does not mix well), which took about an hour all told. James took a siesta on the living room couch. All of you women reading this totally understand the tone conveyed in that sentence, I hope.

#6 - Elinor grabbed off an entire 18pk crate of hardboiled eggs off the table and they promptly crashed to the floor, breaking all over the place. I didn't have the heart to be too angry, though, considering she has a horrible concrete burn on her forehead where she face-planted on the patio walking down the one step that leads to the backyard.

But, in spite of it all, life is good. God is good. I love how our Easter pictures (sorry, James is missing, we gave up after doing my pictures with the kids) reflect the chaotic day we had LOL. He is risen indeed. Alleluia!

Oh Hon, all those things are small compared to what could have happened. One hour late for dinner is no big thing. Elle dropping the eggs, kinda funny from a grandmas prospective. You will laugh about it some day, I promise! James and the coffee and falling asleep, kinda funny, sorry ;) and last but not least I really like the dress your wearing in the pics. What can I say I am an optimist at heart. Wish we could have been there! Love ya all!