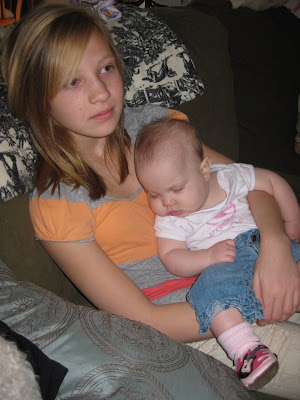 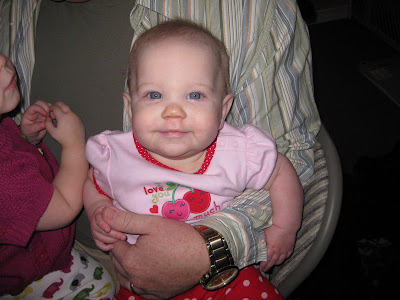 Please dear God, let me hang in there until our vacation and the dinner date Mom and Dad have promised James and I. We are DESPERATELY in need of it - I can't wait. That might be worth braving the plane trip itself. I will survive until then, yes I will. If I proclaim it loud enough it must be true. I probably should have a rule about posting on Saturday evenings. I tend to go a little crazy at this time of day ANY day, but especially when it's a Saturday where James has gotten to spend the whole day skiing. It makes for a very long stretch of 14 days where I'm responsible for about 95% of everything kid-related. I should probably have a bottle of wine handy just for the "witching hour" LOL. Part of the difficulty is that Elle is our clingiest baby EVER. She just won't settle for being put down, ever. She hates her swing, the Bumbo, the Exersaucer, the bouncer, everything. Her preferred place involves my carrying her, but I must be moving around. That's such a newborn thing - I can't believe we're still doing this 7.5 months later. Her dream parent would have to be an APer, I'm sure. With the still-going-strong need to nurse and the desire to be carried everywhere, she'd jump ship from our decidedly non-AP house if given the chance LOL. And, also as it relates to Elle, I have to say, I'm disappointed. I've always held long-term breastfeeding as the holy grail of parenting a baby/toddler. It's been something that, no matter how badly I've wanted it, just didn't work out. And now that we're heading in that direction, I must say I'm feeling a bit disillusioned. I'm kind of tired of breastfeeding. I'm tired of being the only one she wants to hold her. I'm tired of not sleeping through the night. I'm tired of having to battle with her over the nursing cover when we're in public (it's just not possible for me to be discreet without it - I know lots of women don't need one, but I, unfortunately, do). I'm saddened by the idea that we won't be able to redeem our gift certificate to the Anniversary Inn on our anniversary because she refuses to take a bottle. And then there's the guilt I feel about my own feelings, of course. Because I should absolutely adore and treasure these precious nursing sessions - at least that's what all the books say. It's hard to imagine there will come a day when I'll miss breastfeeding, but I'm sure it will happen eventually, especially since she's our last. For right now, though, it's just a matter of putting one foot in front of the other, one day at a time.

Elle is a clone of James, she even has his smile. Thank you for giving me the most beautiful grandkids in the world. Love to all!