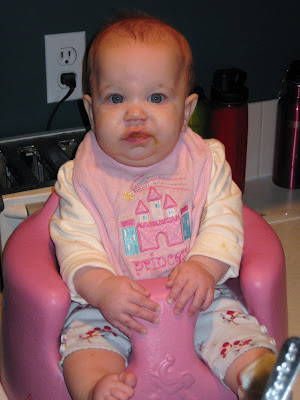 First off, GO PACKERS! It's going to be a rather mundane Super Bowl. Can anybody say Party of 1? James won't be home from skiing til this evening, so it will be me watching the first half by myself. But I still felt like I had to do something, so I'm making a party-themed dinner spread - Dice-shaped cheese spread, gelatin game chips, dartboard pizza, and scrabble brownies. The kids are looking forward to that part, I think. Me not so much as I'll be unable to eat most of it - Ian chose to go to Chuck-A-Rama for his birthday dinner last night and a buffet is always a hit in the points department (although I did WAY better than I usually would). But I'll consider it a good exercise in willpower strengthening. And, switching course, I love this picture of Elle enjoying her first taste of veggies - squash, I believe it was. She's not very enthused. We're working all the orange veggies first.

Wish you could be here for the big game! We are getting together with Uncle Tim and Uncle Mike and families. It should be a fun time, hopefully the Packers win. I love the pic of Elle, she doesn't seem to appreciate her veggies just like her Mom and Grandma!