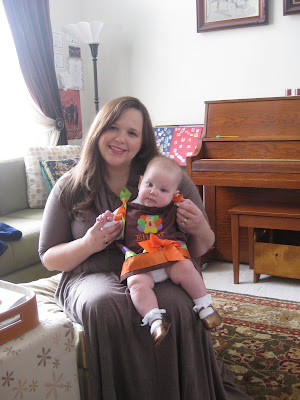 I promise this has nothing to do with lame-o New Year's Resolutions, but with the fact that Elle is almost six months old (and will be starting solids instead of breastfeeding exclusively) and Troy's wedding is in three months (and I ordered my dress two sizes down and I MUST fit into it). It's merely coincidental that I'm starting my weight loss program now. But whatever the reason, it has to happen. I'm so unhappy about where I'm at. Having two so close together really did me in - I've been making poor food choices now for the last two years and time for exercise is nearly non-existent. I'm not sure when the exercise thing will start to happen as Elle is still not a good sleeper AT ALL and I'm just too tired to make working out a priority, but I 100% own the bad food choices thing and that I can and WILL change. I've bought a 3 month Weight Watchers Online membership and I want to make that work, although I kept it relatively short term so that, if it's not working and I need the shame aspect of the real live weigh-in I can make the switch. I'm starting off at 206.8lbs (and I hope you can imagine the courage it took me to make that public, yikes!!)

I know the courage it took to put your weight out there. I haven't been able to do that! Good luck with WW! I think you are already beautiful, just as you are!

You are so strong Melissa, you can do anything you set your mind to. I wish I was half as brave as you!