So You Think You Can Cook 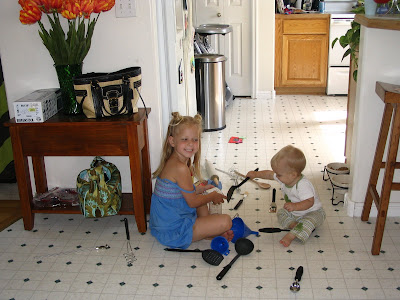 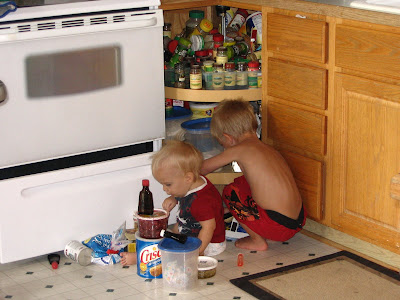 After the toilet became old and boring Colin discovered a new favorite place to play - my cupboards. I think I remember this stage from the other kids, but I don't quite remeber the frustration from walking into a trashed kitchen five times a day. He LOVES to get into my lazy susan cabinet where I keep my baking supplies. For the longest time that corner of the kitchen smelled like black licorice because he spilled all of my anise extract. Then there's the time he found the baking soda, and then the food coloring. (((SIGH))) This too shall pass, right? The funniest thing about the whole kitchen-as-playroom phenomenon is that the older kids have gotten into it too. They often join him in the kitchen for some make-believe play. I'm sure that in 10 years I'll remember this game fondly (when I'm not having to clean up after it LOL).

That is a total boy thing! My boys did that all the time. So far Maggie has yet to dig in my cupboards. I also can't believe you have spices down low where kids can get to them! That's an obvious sign you haven't dealt with this before. lol ;)

How can you say Payback! I think it's hilarious as long as it's not my cabinets...go Colin, go Colin!