Our precious eighth child and fourth son, Boaz Laurent, arrived on Friday, April 14th at 3:24 pm.  He weighed in at 8lbs 3oz and was 20.5 inches long.  His birth story began on Thursday evening.  I finished up my last teaching appointment before starting my maternity leave at 7:30pm.  At 8:30 I felt like I just needed to take a walk.  It was getting dark and it was pretty cold, but I felt like it was a good idea.  After a 30 minute walk, I felt restless but settled into bed and felt drowsy enough to put down my book and try to go to sleep.  That wasn't happening though, and as 11:00 approached I felt increasingly restless and uncomfortable and decided to take a shower just in case.  I felt like maybe this was going to be the night...  And then I fell asleep.  Well, that was disappointing.  But around 4:00 I woke up again to some painful contractions.  I woke James up at that point and the contractions persisted for a good hour, about 7-8 minutes apart.  We called my doctor's answering service and they suggested going to Labor & Delivery, but shortly afterwards, the contractions fizzled back out.  So, at 5:30 James and I headed out for another 30 minute walk in the neighborhood, this time in the light rain.  That kept them going for a while, but again they faded out, so we got the kids ready for school and decided we could just head to my scheduled 9:20 appointment and speak to my OB.  We packed up our hospital bags just in case and headed downtown.  At our appointment, oh glorious news - I'd made progress from 2.5 centimeters dilated last week to 4 centimeters.  That, combined with my sporadic contractions and bloody show, was enough for my OB to say the magic words "Why don't you head on over to Labor & Delivery and I'll meet you there during my lunch break?".  We were SO excited - this was exactly how I hoped this baby's delivery would go, slow and controlled.  So, we went across the street to the hospital, got checked in and the IV started (no 30 minute drama this time, she got it in right away, which was crucial if I was to get the epidural I so wanted this time) and moved from triage to our room.  Contractions were sporadic and weak, so we walked the halls for an hour or so.  After that, my OB popped in and asked if I was open to her breaking my water and I said absolutely.  As soon as that happened (about 1:00), the contractions started almost immediately.  I asked for and received a perfect epidural within 30 minutes of true labor starting (yay!).  Unfortunately, at that point, my perfect labor took a bit of a detour.  Baby wasn't responding favorably to my contractions.  He showed serious decels through the duration of every contraction - his heart rate getting down into the 50s.  His recovery after the contractions was good, but it was easy to see that, as shifting positions didn't help, the room was getting a bit tense.  After about an hour and a half of this, I begin to feel real fear, something I've never experienced during a birth.  I remember praying hard - promising God that I no longer cared if they had to do a c-section, even under general anesthesia, none of that mattered so long as my baby was fine.  Fortunately, my doctor has a very calm personality, and prevented me from panicking too much.  She did, however, want me to start pushing a bit prematurely (I was about 9 centimeters) and get the baby delivered.  That's how I knew that, although the staff was all very reassuring, they were concerned.  The pushing was intense, moreso than some other labors.  I had to work really hard this time!  After about 20 minutes, the OB called for the vacuum (baby was just super displeased about this whole process).  But I was finally able to get him under the pelvic bone on my own, and pushed him out about 5 minutes later all on my own. The epidural did wear off during that phase, so I was so lucky (haha) to get to experience the whole ring of fire again.  He came out much more purple than any of my other babies, and his apgar scores were the lowest too, a 7 and an 8.  You could tell the whole process of labor and birth was difficult on him.  He was born with a nuchal cord (cord wrapped around the neck), which is pretty common and usually not much of a problem, but in his case, it absolutely was a problem - it had been badly compressed during every contraction, especially as he moved down.  I'm so grateful that this was not my first baby, because it would have ended in a true emergency c-section because I wouldn't have been able to have the fast labor that I had.  I can see in all of this story so clearly the hand of the Lord.  He ordained that I would have a weird labor pattern of fitful stops and starts that has never happened before.  He knew that Boaz needed to be born now, and that he needed to be born in a controlled but fast manner.  As I write this, I tear up a little still, one month later, out of gratitude for God's goodness that brought this much-loved baby into the world safe and sound.  He is good, always. 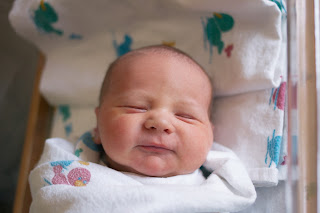 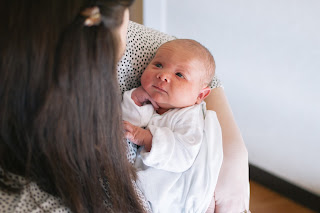 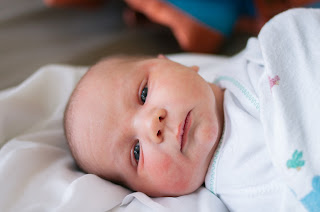 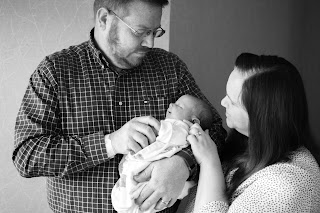