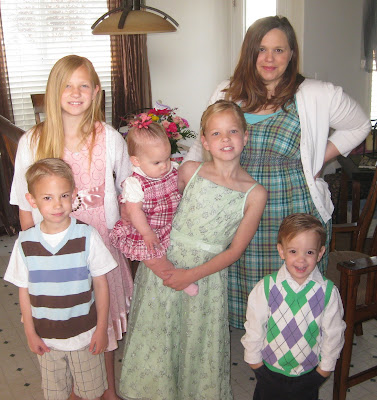 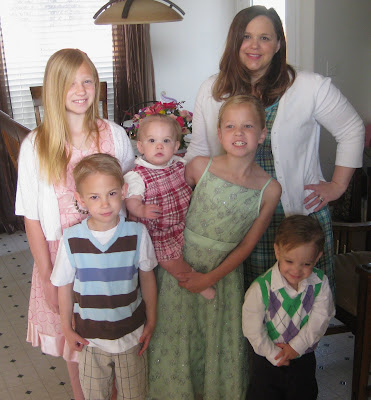 I had a very nice, peaceful Mother's Day this year. We decided to skip the usual extravagant brunch because, between Colin and Cecily, it's just more stress (trying to keep them clean and quiet in a semi formal restaurant) than it's worth. We woke up early because (for once) we were determined not to be late for church. We actually got out of the house by 8:45, which must be a record. We stopped at McDonald's for breakfast as they offer a free meal to mothers, and then we went to church. Since we thought we had more time, we actually ended up eating rather slowly and were still five minutes late for church, but that's better than normal, at least. After church we came home and enjoyed a backyard barbecue (after James engaged in battle with the blackbirds over the grill, which they seem to think is the perfect nesting space, no mater what contraptions he contrives to thwart them) - brats, hot dogs, chips, potato salad, and rhubarb cookies made from the rhubarb in our garden. It was super yummy. Then we opened cards and played soccer with the kids. I got to take a little nap in the afternoon while James, Hero, and Ian took the car to the car wash and cleaned it up really good. We're going to be getting a gazebo for the backyard as part Mother's Day/Anniversary/Father's Day present this month - I can't wait. It was a restful Mother's Day spent in the company of those it should be - my kids. Mother's Day was the last first holiday for Cecily to celebrate - she'll be a year old next week, eek!

We do have the most beautiful daughter and family don't we. Glad you had a great mothers day. Maybe one of these days we can be together for it!