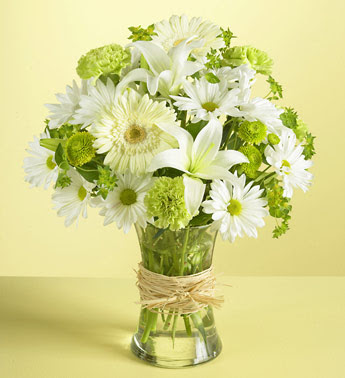 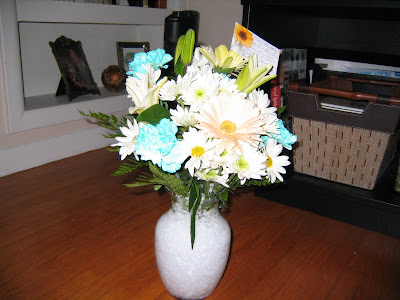 Okay, I tried ordering flowers online last year from Martha Stewart Flowers only to have it arrive late and dead (it was a live orchid), not just once, but twice. It's taken a year for me to work up the courage to try again, but I decided it would be a perfect gift for Mom's birthday. I found an arrangement that I really liked and I thought was very tranquil yet springy. Well, this time it arrived on time, and it wasn't dead (they were cut flowers, after all LOL), but I think the results left quite a lot to be desired. I guess I'll just give up on flowers as gifts, grr. Here's a picture of what I ordered - a lovely arrangement entitled Serene Green, and here's the "creation" that arrived. Doesn't it look like something some 65 year old woman in polyester pants who wears puff paint sweatshirts and decorates her kitchen in cows and daisies would make? And you've gotta love the grocery store cooler vase that apparently doubles as a super-full snowglobe after the flowers die. Sorry Mom.

Always remember it's the thought that counts. Your ordered flowers are beautiful so that's what I see when I look at the one's that came. Hopefully I'll never be the old lady in the stretch pants painting puffy cows but... maybe I'll make that snow globe when the flower's die, LOL. Love to all!

What a bummer! The one you selected by picture sure is beautiful though. And I love your description...too funny!

That's terrible. I would complain for sure. Send them a link to your blog. lol