Happy Early Anniversary to Me 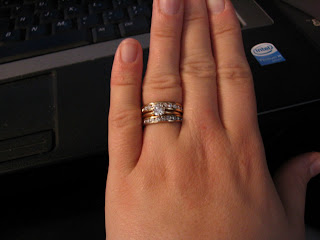 Whew, what a busy weekend we've survived. We went clothes shopping, furniture shopping, pet shopping, household shopping, and, most exciting of all, we finally made it to Lee Read Jewellers to buy my second anniversary band. I've known ever since picking out my wedding band that on our 10th anniversary I'd add a second anniversary band. Who'd have thought that 10 years would pass so quicky! It was a relatively painless event (well, as far as spending googobs of money goes) and my rings are finally all soldered together. The highlight (or should I say lowlight) of the experience was when Allegra proudly announced that she made a "Colin sandwich" in the store playroom. She had placed the baby on a beanbag chair, completely engulfed in it, and then put the second beanbag chair on top of him - see, Colin sandwich. Hero is shrieking "Colin could've have died" at her sister... All in all, it was classic Fife children.

How fun! Your ring is beautiful!! Ü