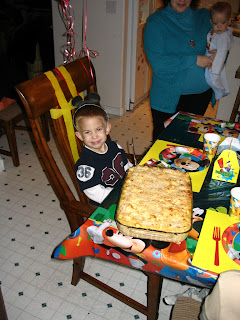 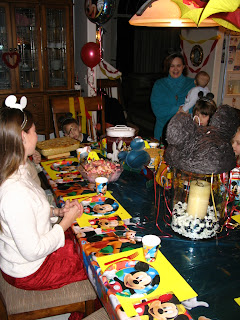 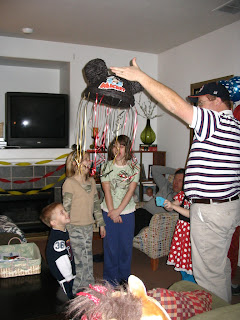 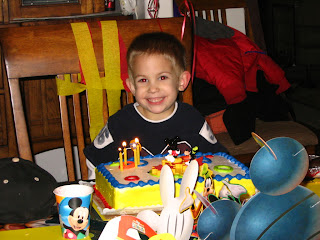 I can't believe I didn't get this on yesterday, on his actual birthday, LOL. I know, I know, I'm such a bad mom. In honor our dear son's fourth birthday, please indulge me in a little trip down memory lane... The story truly begins on the night of February 4th - I was a desperate 39 week pregnant woman who needed the baby out yesterday, lol, so I sent James to the store for castor oil. With the optimism of someone who's never tried castor oil, I drank down a custom orange smoothie/castor oil blender oil concoction at about 8pm. About 30 minutes later the first bathroom trip occurred, which was about what I expected. And then...nada. I was so bummed to go to bed that night with not a contraction in sight. At about 3am I was woken up by contractions - I could hardly allow myself to believe that this would be it, but after about 15 minutes there was no mistaking it - this was the real deal. I woke James up (who mumbled something along the lines of "go back to bed") and it was time to call in babysitting reinforcement. After what seemed like an eternity, James' dad arrived at our house to watch the girls and we got into the car for the hair-raising ride to the hospital. It was about 5:50 in the morning at this point and I was literally climbing up James' arm as he tried to drive - the contractions were intense and coming quickly. Luckily traffic was light and we arrived at St. Luke's quickly. I didn't want to create a scene, so James parked and we walked into the hospital although, trust me, that was the LONGEST walk of my entire life. By the time we got to Labor & Delivery I was barely coherent and the check-in process seemed to take forever, but they finally whisked me into a triage room. At this point the castor oil was kicking in again and I hardly knew whether I was more miserable from the contractions or being stuck to a 5 second radius of the bathroom. They dutifully checked me, and apparently I really was in labor (duh!) and at 6 cm. I was checked into a real room quickly and the staff blessedly got me an epidural very quickly, even before all the labwork was done. This epidural didn't work as completely as some of the ones I've had, but it definitely took the edge off and I was fairly comfortable. Hero and Allegra arrived at the hospital around 8 or so, and I hit 9cm very quickly. Ian arrived after 30 minutes or so of pushing at 11am. It was a wonderful delivery - my first without any assistance (Allegra was a natural birth, but she did require vacuum assistance). He arrived with a head of dark brown hair, dark blue eyes, weighing in at 7lbs5oz. We were all in love immediately, although at a bit of a loss about what to do for a boy after two girls (we've got that figured out now though, lol)... Today Ian is a fiesty four year old who enjoys preschool, Cubbies, and playing with his sisters and baby brother. We had his party on Saturday - the theme was Mickey Mouse (he's my favorite boy, Ian says) and we had macaroni and cheese, pizza dip, fruit salad, peas, and white cake with lemon filling. The kids especially enjoyed the Micky Mouse ears-shaped pinata. We love you Ian!