is in full swing and I want to get off! Gosh I feel like an absolute lunatic. One day I'm low and the next day I'm high. I think that most women expect to deal with crazy emotions for the first six or eight weeks after giving birth, but for me it lasts longer than that. I'm not sure if that's just a quirk or if it's normal and most women try to hide it. It's a combination of both mental and physical stuff too. This week I've started the hair falling out phase. I have really long hair right now and I'm so tired of finding it everywhere, on the baby, on the bed, on my clothes. A minor thing, but an annoyance that, on a bad day, can be the proverbial straw. It's not all hormones, though. Things are undeniably tough right now. Like "I don't want to be a grown-up anymore, I want someone else to make the decisions" tough. I think it's exacerbated by last year being such a stinky year too. Thank goodness no one was able to tell me last year that I'd be in the same spot at the same time next year. (((sigh))) I don't want the blog to turn into an exercise in self-pity, so I'll leave it at that. Here's to hoping it gets better, right? Elle's getting cuter by the day, at least. 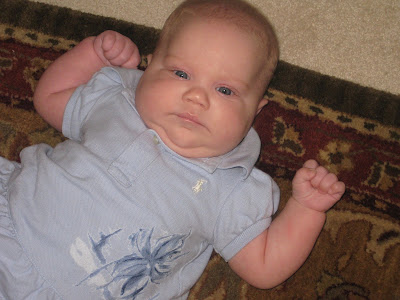 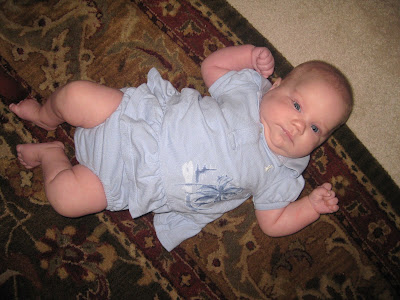 Things will get better Hon. God has taken care of you this long and He's not going to stop now! I have to remind my self of that all the time so I should talk right....? Elle is so cute. She's such a chunky monkey and we're not used to seeing that with your kids. Tell her Grandma is coming soon and she better save lots of playtime and hugs and kisses for me, along with the other kids too!

I'm feeling you sister! I was just wondering the other day how long this would last. I'm such a grump.....but loving this baby! They are such a fun age!

I feel ya. I feel like I'm still on that roller coaster over 2 years later. I think I'm just getting old though. lol. I'm sorry you're having a tough time. Elle is a cutie pie, though. So chunky and cute... ahhh :) Makes me miss a little baby. Enjoy her.

I know exactly how you feel on both issues (the pp and the "don't wanna grow up, wanna stay a toy'r us kid" LOL!). I'm 6months pp and still going through "icky-ness" sometimes but, I can say without a single doubt that God is so faithful and He will see you through this. (((HUGS)))