This Stuff Gets Around Fast 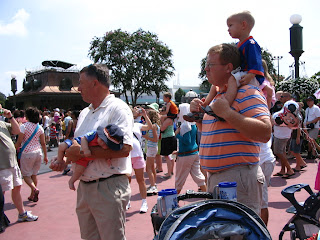 Okay, Bobbi got me again. So I'll play another game of tag.
What is his name? James Patrick
How long have you been together? We met for the first time 11 years ago and we'll celebrate our 10th anniversary this May
How old is he? 31
Who eats more? It's always a competition, but I HOPE he wins
Who said I love you first? James did, by a few weeks
Who is taller? Definitely James, by nearly a foot
Who can sing better? I think it's me, but James sure sings a lot at inopportune times (drives me nuts)
Who is smarter? Well, I like to think that I'm more intellectual, but I might just be deluded. James is definitely better with finances and numbers
Who does the laundry? Uh, yeah, me. James' contribution is to bring the hampers downstairs and upstairs
Who pays the bills? James, I'd be lost if I had to do it
Who sleeps in the right side? James cause that's the man's side, isn't it?
Who mows the lawn? The lawn guy :-) James used to do it but it was always one more pesky chore to do over the weekend and I never thought it looked good enough so we wised up and hired someone this last season
Who cooks dinner? Whoever is one kitchen duty at the restaurant of our choice :-) We do eat out a lot but I'm usually the one cooking dinner if we're at home - James' idea of making dinner involves a can of pork and beans
Who drives? James - I hate driving
Who is more stubborn? Me :-)
Who kissed who first? James probably had to initiate it, but I'm sure it was very mutual
Who asked who out first? Again, I think James probably took the initiative - especially since he flew across the country for our first date
Who proposed? James, on my birthday
Who has more friends? James, he's much more sociable and outgoing than me
Who is more sensitive? That's a toss-up, we're both sensitive in our own ways
Who has more siblings? We both come from families of two boys and one girl - I'm the oldest though and he's the middle child
Who wears the pants? I let James think it's him ;-P